’Tis the Season to Get Lucky

Until a trip into work on Christmas Day leaves her snowbound in the Fifth Avenue department store with her boss’s far-too-tempting playboy son Ryder Sinclair.

Ryder’s rugged, reckless and none too pleased to be stuck in a place he hates with an uptight workaholic like Kate—but as the night draws on, the lights go out and the temperature rises, until they’re both wondering is this the season to get lucky? 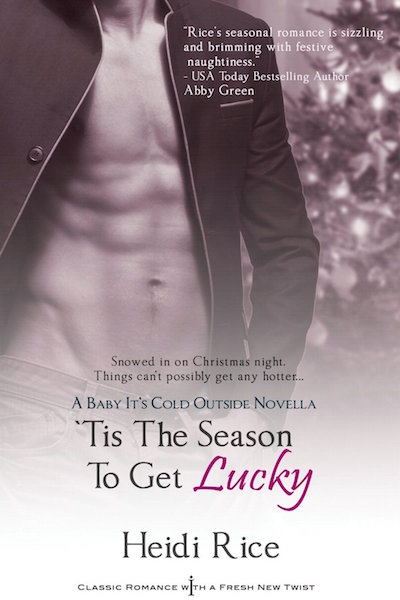 It occurred to her what he was suggesting. “We can’t just take the stuff,” she said, trying to push the prickle of alarm front and centre so it drowned out the inappropriate thrill. “That would be shoplifting.” She tried to think, not easy when he was looking at her as if she’d accused him of cannibalism. “Although I suppose we could leave an IOU.”

“No way,” he said, the flirtatious smile replaced by a stubborn frown.

“Because this is an opportunity I’ve been waiting for my whole life, and you are not going to screw it up for me.”

“Are you joking?” she said cautiously, and wondered if this had something to do with his apparent dislike of his father.

“No, I’m not. Didn’t you ever have that dream as a kid where you’re in the candy store after hours, and you can take whatever you want? As many Hershey Bars and Baby Ruths and Reese’s Pieces as you can stuff into your mouth?”

“I doubt it, not if it was after hours, it might have been dark,” she said.

He gave a rough chuckle, the frown disappearing—and it occurred to her that she’d actually made a joke of sorts about her phobia… Um, paranoid fear.

“Katherine, then you’ve been missing the best dream there is. And we’re now living the adult version of it. We’re stuck here all night. We can take what we want and do what we need to do to survive.”

“We’re not going to starve to death in one night,” she pointed out, deciding to ignore the thrum of anticipation at the thought of “doing what they needed to do”. What exactly was that going to entail?

“And there’s no one here to stop us,” he continued, riding roughshod over her objection. “And don’t forget I’m one of the fat useless directors, so I get to make the rules.”

“I never said you were fat,” she pointed out, relieved that they seemed to have gotten over the pointless argument.

But as he led her up the stairs, she couldn’t deny that she was seriously tempted for the first time in her life to do something reckless, and irresponsible and inappropriate. As a child and then as an adult she’d always been so careful to follow every single rule down to the letter, to read the small print, to be productive and scrupulous and sensible and most of all cautious, partly because her mother had never been any of those things and it had always made her feel hopelessly insecure.

Those characteristics had got her a job she loved, in a city she had come to adore—and she’d still have those things tomorrow. But it had also left her getting dumped via email and feeling lost and alone and worthless on Christmas Day.

Would it really be so terrible to be led into temptation by Ryder Sinclair — just for one night?

“You ever heard the expression “What happens in Vegas”,” Ryder asked conversationally.

“Yes, I think so,” she said, knowing she should definitely be objecting to this line of reasoning. “What happens in Vegas, stays in Vegas,” she quoted. “But we’re not in Vegas.”

“True enough, but as it happens there is another, less well known statement that begins… “What happens in a snowbound department store on Fifth.”” His voice trailed off, the implication clear as he released her hand, to place one warm palm on her hip.

She stood stock-still, not able to move, as the fingers of his other hand curled round her neck and threaded into the hair at her nape. “We’ve got all night, Katherine.” His lips touched hers, the kiss tender and yet hot enough to make her gasp. “We’re here alone, with everything Sinclair’s has to offer at our fingertips. And I don’t know about you.” His fingers roamed into her hair, massaging her scalp as he nibbled kisses along her jaw. “But I’m suddenly thinking this could be a Christmas gift—instead of a Christmas nightmare.”

Her head dropped back, letting his lips find the pulse point in her throat, and the hot, hard spike of desire, that she hadn’t felt in such a long time, rushed into her sex.

This was stupid, and insane, and very very bad… But when he shifted closer and the solid length of him prodded her belly, she somehow persuaded herself that, after everything they’d already been through tonight, maybe bad wasn’t completely unforgivable any more.

She lifted her arms, let her fingers curl around his neck.

“But won’t this put us on Santa’s naughty list?” she said, surprising herself with the flirtatious comment.

He snorted out a laugh and hauled her closer. “Katherine, I’m counting on it.”