If you adore Sleepless in Seattle and Pride and Prejudice and The Avengers, then you want a movie guide aimed at women like you. Women who enjoy romances and more! You like both a good kiss and a good knockout and refuse to be categorized-but you wish someone like you would recommend movies.

Which brings Harlequin author and professional movie critic Heidi Rice to the rescue. Whether it’s nonstop action with a little heart ‘n’ soul, sweetly adorable cartoons, a classic black-and-white screwball comedy or that under-the-radar flick that you never knew you were missing, Heidi Rice will lead you through her must-sees and why you will also enjoy them. From Ryan Gosling’s six-pack to that iconic orgasm sandwich delivered by Meg Ryan, right up to the double whammy of hotties in Prisoners (Gyllenhaal and Jackman)—there’s a little something for everyone. 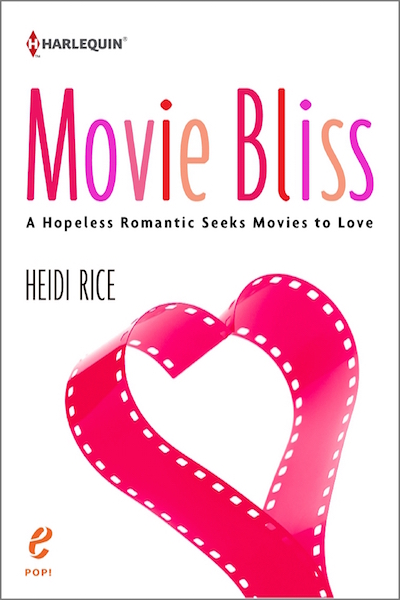 Way back in the early noughties, those of us of a certain vintage were all waiting with bated breath for the movie version of Helen Fielding’s ultimate chick-lit riff on Jane Austen’s great romantic novel. While I wanted it to be as fabulously funny and wildly romantic as Fielding’s original story, I was convinced I would be disappointed. Because, let’s face it, movies of best-selling books rarely deliver and well, as a London gal, when they cast stick-thin American Renée Zellweger as our Bridge I was like… Whaaa???

Yes, well, I had to eat my hat on that one (or should I say, my really gigantic knickers). Because Ms Zellweger gained the required pounds to play our plump and definitely-not-perfect girl-about-town and perfected a London accent so authentic that even I couldn’t fault it, giving us a Bridget that made me laugh, cry and cringe (while laughing and crying) in equal measure.

That said, Ms Zellweger was greatly helped by the spot-on casting of her leading men. Colin Firth, after his wet-shirt performance to die for as the real Mr Darcy in the BBC’s 1990s version of Pride & Prejudice, was of course the only man to play uptight but delectable barrister Mark Darcy – not least because it was Firth’s original Darcy who inspired Fielding’s hero. (BTW, in a nice piece of serendipity, Mark Darcy was the inspiration for my barrister hero Callum Westmore in Cupcakes and Killer Heels).

Firth it turns out, beneath the dark, smoldering good looks and plumby British reserve is actually a dab hand at comic timing – delivering a performance that made me swoon all over again (and no lake-swimming was required). Plus he looks surprisingly cute in a dodgy reindeer jumper.

But perhaps the real surprise was the spot-on casting of Hugh Grant as irredeemable cad (and undeniable studmuffin) Daniel Cleaver. Up until this point in time, Grant’s career had involved playing puppy-dog-cute posh boys a la Four Weddings and a Funeral and Notting Hill. Who knew he could play bad boys so well? These days, of course, we all know that the cheeky, naughty, sardonic charm that made him so good as Bridget’s flirty, dirty boss is perhaps not that far from the real Hugh, but back then… Wow! * smacks forehead in disbelief * revelation time.

So as Renée’s Bridget wends her way through the trials and tribulations of noughties dating, yo-yo dieting, career disasters, parental embarrassments and the two men vying for her affection – one bad, one good and both extremely hot! – it’s impossible not to laugh your way through her journey to true love too.

Not only that, but this film also includes the Seven Deadly Dos and Don’ts for the single girl on the look out for lurve… Which are:

1). DO be aware that when men have a street fight, it never looks like it does in the movies (except this movie, that is!).

2). DO try to avoid being filmed going down a firemen’s pole (no euphemism intended) in a thong.

3) DO double check all invitations to Vicars and Tarts fancy dress parties before donning your bunny girl costume.

4). DON’T use blue string while cooking.

5). DON’T ride in a convertible without a scarf, unless you want to have the bad hair day from hell.

6). DON’T attempt karaoke when drunk, unless you happen to be Aretha Franklin.

7). And when going on a date with a hot guy, DO leave your ‘absolutely enormous pants’ at home.

Got all that? Good. Your journey to true love should now be a bit smoother than Bridget’s.

Tis the Season to Get Lucky

10 Ways to Handle the Best Man
Scroll to top