Gina Carrington knows exactly how to have fun! But when she sleeps with her friend’s brother, the off-limits Carter, she quickly discovers she’s overstepped the mark.

…life is so much more fun!

Years later, Gina sees Carter again to prepare for her friend’s wedding, and she can’t help but wonder what the harm would be in one more night…. He’s available, gorgeous and behind that laid-back Southern charm there’s a wild side even she can’t tame! But Gina has secrets which she can’t hide forever—will their chemistry be strong enough to keep Carter by her side when her secrets come to light?

# 2: The Girl Least Likely to Marry by Amy Andrews

# 3: Maid of Dishonor by Heidi Rice 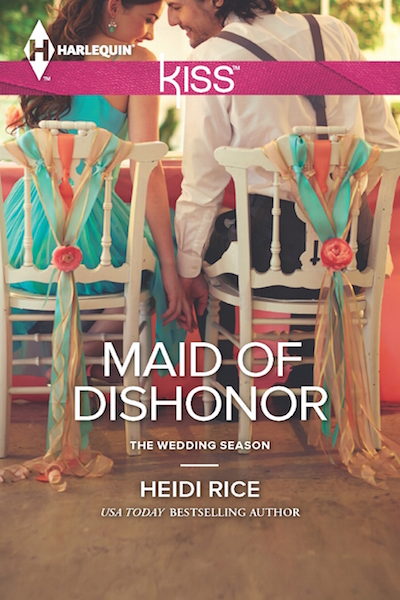 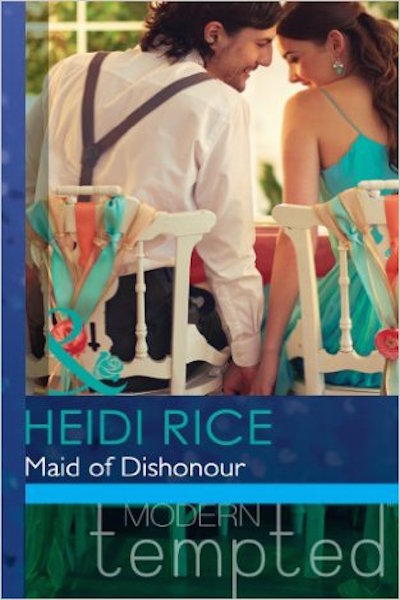 Crap! She needed to get out of here now.

The waitress returned with the check, and Gina threw several bills on the tray without counting them. The guilty flush made her breathing speed up as she shot across the lobby.

Gloria Gaynor singing I Will Survive blasted from her bag at top volume making her steps falter. It took her a moment to remember that Gloria’s strident disco classic was her phone’s ring tone.

She paused, fumbled for the phone and stared at a number she didn’t recognize. Glancing at the clock above the lobby’s exit doors, a little of the panic retreated. She still had thirty minutes before Carter was due to arrive. She took a steadying breath and clicked the answer button. This might be a new client responding to her recent social media campaign for new business. She couldn’t afford not to answer. She’d simply have to talk and run.

But as she pressed the phone to her ear, the deep laconic Southern accent had the heels of her sandals sinking into the deep pile purple carpet and her heart pounding into her throat.

‘Hello Gina. It’s Carter Price. I got your message.’

‘Carter. Hi. How are you?’ she said the false brightness making her wince.

Good grief, was he at the reception desk? Right behind her? Maybe he’d phoned ahead? Please let him have phoned ahead. She couldn’t risk turning around to check. So she kept walking. The exit doors were only a few feet away.

‘I’m good,’ came the husky reply. ‘Although I’m wondering where you’re headed in such a hurry?’

She spun round. The phone dropping away from her ear as she spotted the man standing less than ten feet away, with one elbow propped against the reception desk, a phone at his ear — and cool aquamarine eyes locked on her face.

Her breath got trapped somewhere around her solar plexus — as she debated the probability of teleportation actually existing.

Beam me up, Scottie. Right now.

‘Don’t move,’ he said into his phone, before switching it off and tucking it into his back pocket.

Her thighs quivered alarmingly as he walked towards her. She locked her knees, determined not to collapse into a heap as the shot of adrenaline collided with the explosion of heat in the pit of her stomach — and it occurred to her that the paparazzi pictures had not done him justice. Savannah’s most eligible bachelor wasn’t just hot, he was positively combustible.

She forced air through her burning lungs grateful for the fortifying buzz from her martini as he got close enough for her to pick up the smell of soap and man — and remember how much taller he was. At five foot seven, she wasn’t used to men towering over her, but Carter Price had no trouble at all making her feel like a midget.

His steady gaze swept over her — then arrived back at her face. ‘It’s been a while, Miz Carrington.’

But not nearly long enough, if the sweat popping up on her top lip was anything to go by.

‘You have improved with age,’ he said, his tone low and amused. ‘Like a fine wine.’

So had he, she thought. The few strands of grey at his temples, the new creases round his mouth, the crinkles at the corners of his eyes and the waves of thick dark hair that now touched the collar of his white shirt only adding to the confident, take-charge charisma that had been all too evident in the paparazzi pictures.

Say something, you silly cow.

Too Close for Comfort

Tis the Season to Get Lucky
Scroll to top