What would you do if you got caught hiding in the Ritz hotel bathtub of a tall, dark and hunky stranger?

But the morning after, Mel ends up with the opportunity of her career that she just doesn’t want.

Forced into accompanying Jack on a jet-set book tour to Paris and New York, Mel knows she’s in danger of falling head over heels for a man who trusts women about as much as he trusts reporters… which is not at all.

Now, to save her heart, all she has to do is resist the irresistible…

Published in the US as: The Millionaire’s Blackmail Bargain

Best friends Mel and Louisa lead each other into hot trouble … But can they find their happily ever afters with men they never expected to fall for?
#1: The Mile High Club: Mel & Jack
#2: Pleasure, Pregnancy and a Proposition: Louisa & Luke 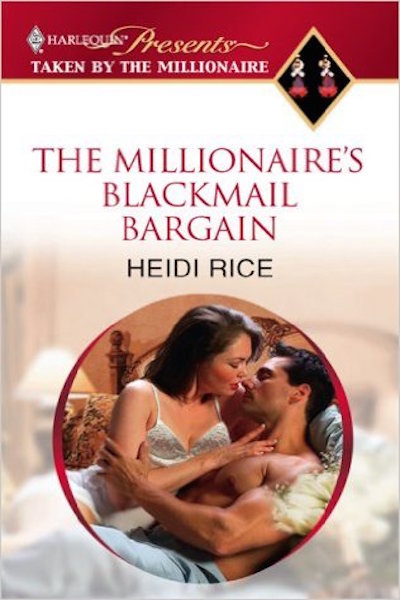 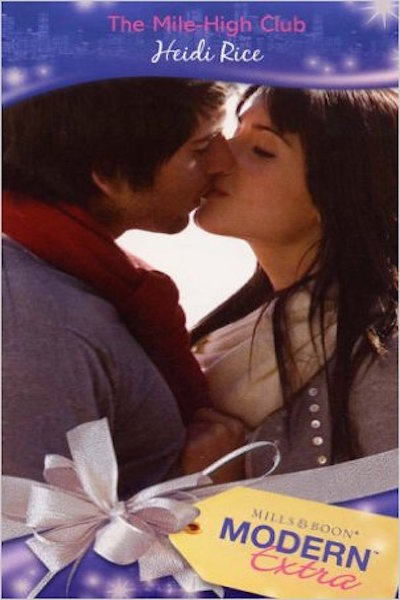 Mel fisted her hands to stop them trembling and sunk down further into the bath as the light flashed on. A dark shape crossed in front of the gauzy layers of shower curtain.

But at least he was whistling. Maybe he wouldn’t mind when he found a mad woman hiding in his bathroom? She swallowed and prayed her stomach wouldn’t grumble. The fear and the hours she’d spent in confinement were making her head start to spin. Running water sounded and then the whistling stopped. Was that the hum of an electric shaver?

Mel tried to inch upright without putting her head too far over the lip of the bath. She needed to be ready to put her plan — pathetic as it was — into action. The humming stopped and the whistling started again. Then came the deafening crackle of a zipper and the thud of something hitting the floor. Mel felt her heart jump into her throat and had to suppress the yelp when a tanned, muscled forearm sprinkled with dark hair appeared above her and grasped the shower control.

Two quick twists and a deluge of cold water shot out of the showerhead. Mel squealed as the icy spray hit her full in the face.

The shower curtain whipped back and towering over her was the hunk — without a stitch on. A sprinkling of dark hair defined the contours of a hard muscled chest and arrowed down to his groin. Mel’s blood pressure shot up to boiling point as her eyes followed the arrow down completely of there own accord. Through the deluge of warming water, she saw something she knew she’d never forget as long as she lived. Her gaze rocketed back up to his face so fast it was a wonder she didn’t get whiplash. Piercing blue eyes glared at her, accusingly. But he made no move to cover himself.

Mel pushed the dripping hair off her forehead, her hand shaking so hard she thought she might be having a stroke.

‘What the hell are you doing in my bathroom?’

Mel tried to scramble up. She dropped her bag, slipping back as the shower spray continued to pummel her. ‘Could you turn it off?’ Her voice came out on a pathetic whimper.

He waited several beats, before reaching out and turning off the spray, his eyes glaring at her the whole time.

She stood up, slowly, keeping her eyes trained on his face as if her life depended on it. She would not look down. She would not. Her skin must be vermilion by now and she couldn’t control the tremors raking her body. At last, he let go of the curtain, reached behind him and took one of the small towels from the rack. The quick glimpse of a tight male butt made Mel gasp.

He turned back sharply, wrapping the towel firmly around his waist and tucked it in.

Still, he didn’t say anything, just pinned her with that forbidding look in his vivid blue eyes. Even with the added height of the bath beneath her, Mel realised he was still taller than her. He had to be at least six foot two or three.

His gaze dipped to her chest.

Mel glanced down at herself and gaped in horror. The water had made her blouse and bra transparent. Her puckered nipples were clearly visible through the sodden material. She clasped her arms across her chest, clung onto her shoulders, but couldn’t control the trembling or the hot flush racing up her neck. Could this actually get any worse?

‘You better get out,’ he said, his voice ominously calm.

He stepped back, letting her climb out and then turned to reach for another of the towels on the shelf opposite.

A flash of adrenaline surged through Mel. Stop being a ninny and get out of here.

She launched herself across the bathroom, her feet sliding on the wet tiles as she clutched the door handle and lurched into the bedroom.

She heard the pad of footsteps behind her and tried to speed up.

The words seemed to boom in her ear as strong arms wrapped around her from behind and hauled her back against a solid male chest. Her feet lifted off the floor. Frantic, she shoved her elbow back, heard a muffled grunt. But his grip on her only tightened, pressing her heaving breasts against warm hard forearms. The spicy scent of his aftershave filled her nostrils.

‘Stop goddamn struggling. I’m not going to hurt you. I want to know who you are and what the hell you’re doing here?’

The buzzing in Mel’s ears became deafening. Don’t you dare faint you silly cow. As she registered the thought, her skin flashed hot and then everything went black.

Bedded by a Bad Boy