From a compromising position…

Kate Denton was stranded in a Las Vegas hotel with nothing but her underwear and her passport! She desperately needed some money to pay for a flight home, so she threw herself on the mercy of the hotel owner: dark, brooding, incredibly sexy Zack Boudreaux…

…to a position in the boss’s office…

The feisty English girl was so full of outraged indignation Zack was certain she was no hooker, despite first appearances. He’d given her a bathrobe, but she was also insisting he gave her a job… And after seeing those tantalising knickers he struck a deal: for two weeks she would be at his beck and call as his very personal assistant.

Preferably without the knickers…

Reprinted in: Out of Hours: His Feisty Assistant 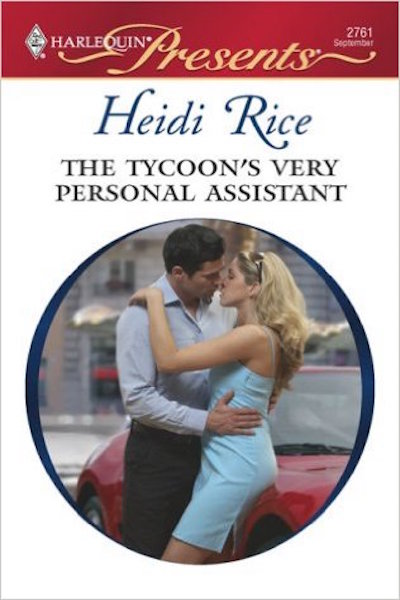 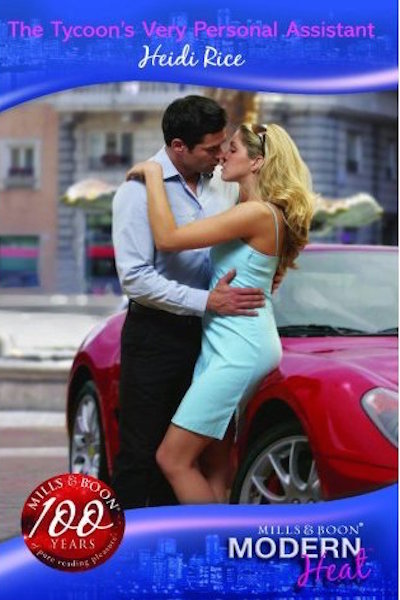 ‘I told you I’m not a working girl.’ Kate Denton shifted on the stiff leather chair and shot the shadowy figure sitting on the other side of the mahogany desk her don’t-mess-with-me look. Jet-lagged, shaken and as good as naked under the hotel robe she had on, Kate knew the look wasn’t one of her best.

He didn’t reply. The insistent tap of his pen against the desk blotter seemed deafening in the silence. Bright Vegas sunlight shone through the wall of glass to his right and cast his face into shadow, making it impossible to tell his reaction.

Oh goody, Kate thought grimly. After the most humiliating experience of my entire life, I get interrogated by a hotel manager with a god complex.

Apprehension slithered around in Kate’s stomach like a hyperactive snake. Why on earth had she demanded to see the hotel manager in the first place? It had seemed like a good idea when the concierge had started making noises about calling the police but once she’d been whisked up to the penthouse suite of offices and ushered in here, she’d started having serious doubts. The guy wasn’t behaving like any hotel manager she’d ever met.

She felt more intimidated now than before.

Obviously hotel managers had a much higher profile in the States. This guy’s workspace would have made the Oval Office look tacky. A lake of luxurious blue carpeting flowed to floor-to-ceiling windows, showcasing the hotel’s enviable position towering over the Las Vegas Strip. The view wasn’t the only thing giving Kate vertigo. The room was so big it accommodated a separate seating area with three deluxe leather sofas and Kate had recognised the striking canvas on the far wall as that of a modern artist whose work now went for millions. She’d also noticed the guy had not one but three secretaries standing guard outside.

No wonder he had a god complex.

‘A working girl? You mean a hooker?’ His deep voice rumbled out at last, sending an annoying shiver of awareness up Kate’s spine.  ‘I don’t recall saying I thought you were a hooker, honey.’

Kate heard the hint of amusement and her jaw tensed. ‘Who gave you permission to call me honey?’ she said, grateful for the crisp note of condescension in her voice.

‘I don’t need permission,’ he replied dryly. ‘When the lady in question was trying to break down a door in my hotel wearing nothing but a bra and thong.’

Kate swallowed. Okay, there was that.

‘It’s not a thong. I have proper knickers on,’ she blurted out and then winced.

The memory of getting caught by the bell captain and bundled into the robe flooded back to her. Embarrassment scorched her cheeks. The fact she had something slightly more substantial than a thong covering her butt cheeks suddenly didn’t seem all that relevant. That she’d mentioned it to him was mortifying. She’d yet to get a proper look at the guy and already he knew far too much about her underwear.

The metronome taps of his pen interrupted her thoughts. ‘Proper panties or not, you were causing a disturbance.’

The heat in Kate’s cheeks soared. What was this guy’s problem? She was the one who’d been manhandled. So she’d raised her voice and kicked the door a little, but wouldn’t anyone who got stranded in a hotel corridor practically naked?

‘I was trying to get back into the room.’

‘Yeah, but it wasn’t your room was it,’ he said, propping his elbows on the desk. He leaned forward and the sunlight illuminated his features at last.

Kate’s heart pulsed hard. Hooded green eyes studied her out of a tanned face which was quite simply dazzling in its masculine beauty. Sharp black brows, chiselled cheeks and short dark hair which curled around his ears only added to the firepower. Even with his face carefully devoid of expression, the guy might as well have had a huge neon sign over his head flashing the word ‘irresistible’ at her.

From the way he was watching her, she wondered if he was waiting for her to swoon. She tightened the tie on the robe, absolutely determined not to start drooling.

Luckily for her, she was currently immune to the alpha male of the species.

‘It was my room, or at least it was supposed to be,’ she said, annoyed by the quake in her voice. She wrapped her arms round her waist, far too aware of the air-conditioned breeze chilling her bare legs.

His gaze swept over her and Kate felt the throb of response. All right, maybe not completely immune.

‘You’re not registered here.’ His emerald eyes shifted back to hers. ‘Mr Rocastle, who is the registered guest, has made a complaint against you. So, why don’t you tell me why I shouldn’t just kick you out in your proper panties?’

There it was again, the telltale lift in his voice. Kate went rigid. Was he making fun of her?

Andrew Rocastle had duped her, practically assaulted her and then humiliated her into the bargain. And now this guy thought it was funny. When had this become stomp all over Kate day?

‘It’s not my fault Mr Rocastle didn’t put my name on the registration card when he checked us in this morning. I thought he’d booked us separate rooms,’ she ground out, angry all over again at Andrew’s underhanded attempt at a seduction. ‘And anyway, I don’t have to explain myself to you. None of this is any of your business. You’re a hotel manager, not my mother.’

Zack Boudreaux’s eyebrow winged up. For such a little thing, she sure had a big mouth. He didn’t consider himself arrogant, but women were usually a lot nicer to him. He’d certainly never encountered this level of hostility before.

In the normal course of events, he wouldn’t even know about this type of minor disturbance, let alone be asked to deal with it. But with The Phoenix’s manager unavailable for the day and his deputy on a training programme, the concierge had referred the matter up to Zack’s PA. He’d heard the commotion in the outer office and buzzed the woman in out of curiosity. Truth be told, after clearing his calendar for the rest of the week in preparation for his trip to California, he’d found himself with nothing to do for the first time in close to ten years and he was bored.

One thing was for sure, the minute this feisty little firecracker had waltzed into his office wrapped in her bathrobe and a very bad attitude, he hadn’t been bored anymore.

He knew it was perverse, but for some weird reason he found her sassy comebacks entertaining. Imagining her in the corridor without the bathrobe was doing the rest.

‘I don’t manage this hotel,’ he said. ‘I own it, as well as two others in the South West.’

‘Bully for you,’ she shot back, but the statement lacked impact when he spotted the flicker of panic cross her face.

‘And anything that happens in my place is my business.’ His gaze remained steady on hers. ‘I make a point of it.’ He kept his voice firm. He hadn’t made a fortune at poker in his youth by showing his cards too early. He didn’t want to let her off the hook just yet. She had caused a disturbance and he was intrigued enough to want to know why.

‘Maybe you could make a point of getting my clothes back for me, then,’ she snapped.

Zack’s lips twitched as she glared at him. With her blonde hair haloing around her head in haphazard wisps, her full lips puckered in a defiant pout and her round turquoise eyes bright with temper, she looked cute and mad and sexy as hell. Kind of like a pixie with an anger management problem.

His lips curved before he could stop them.

Her round baby-blues narrowed dangerously. ‘Excuse me, but do you think this is funny?’ The clear, precise and slightly snooty English accent made his pulse spike.

Her voice should have reminded him of weak tea and pompous aristocrats — the two things he’d hated most during the years he’d spent in London as a teenager — but it had a smoky, seductive edge that made him think of rumpled bed sheets and warm fragrant flesh instead.

He cleared his throat, and stifled the grin. ‘Funny’s not the word I’d use,’ he said, his gaze flicking down to her cleavage.

She tugged hard on the lapels of the thick robe, hastily covering the hint of red lace.

His eyes rose as he acknowledged the quick punch of lust. ‘Don’t worry, you’ll get your clothes back,’ he said. ‘But first I want to know how you and Rocastle are connected and what he did to make you want to cause my hotel criminal damage.’

Pleasure, Pregnancy and a Proposition
Scroll to top