Bedded by a Bad Boy

Jessie Connor is an English rose with firecracker red hair and a temperament to match. Honest, open and impulsive with a capital I, she’s set her heart on finding Mr Right.

Monroe Latimer is a tough loner with a past. A drop-dead gorgeous Harley-riding American bad boy who doesn’t do commitment. No way, no how.

One look at Monroe and Jessie knows he’s about as Mr Wrong as a guy can get, there’s just one great big flaming problem. He fires her blood like no other man ever has and his killer baby blues are focused right on her. His look says he’ll bed her – but never wed her…

Is Jessie the one who can tame the untameable?

Reprinted in: Bedded for His Pleasure

Published in the US as: Bedded by a Playboy 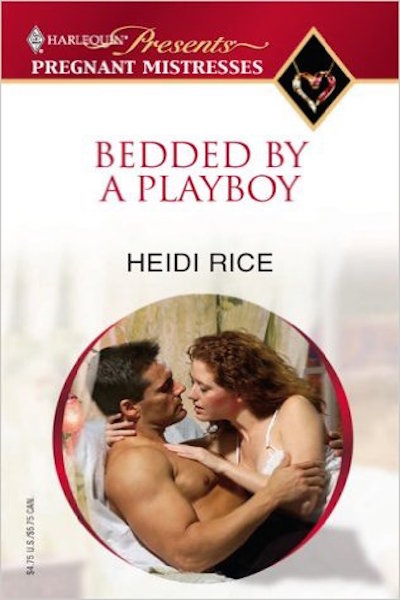 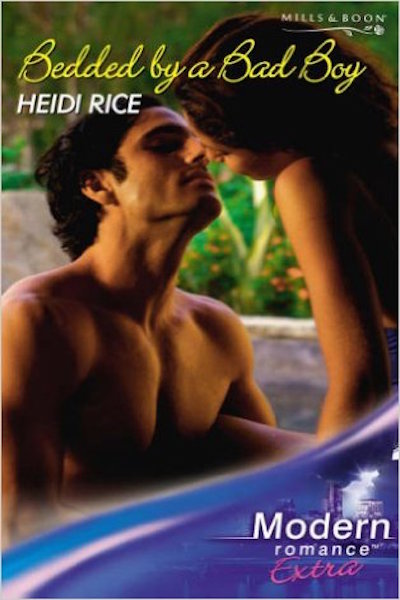 Keeping her breathing slow and steady, Jessie tiptoed across the patio. She stopped dead when her trespasser shoved whatever it was he’d been staring at back into his pocket. When he didn’t turn around, but reached for his t-shirt, she let go of the breath caught in her throat.

Humming some tuneless melody, he sat down on the sun-drenched tiles, rubbed his feet with the T-shirt and picked up a sock.

Sticking her two fingers out, Jessie shoved the points between his shoulder blades and shouted out in her most authoritative voice. ‘Don’t move. I have a gun.’

He stopped humming, his back went rigid and he dropped his sock.

‘Okay, don’t get excited.’ His voice was gruff and tight with annoyance. He sounded American, but there was something else about his accent she couldn’t quite place.

‘Put your hands up, but don’t turn around.’

His skin felt warm, but the muscles beneath were hard as rock, flexing under her fingers as he raised his arms. Up close, he looked a lot more dangerous. Jessie spotted a faded tattoo across his left bicep. Ridged white scar lines criss-crossed the tanned skin of his back. But then she noticed something else. Despite the impressive muscles across his shoulders and upper arms, he didn’t have an ounce of fat on him. He was so lean, she could make out his ribs. A Goliath who didn’t eat properly? How odd.

‘Listen, put the gun down and I’ll get out of here. No harm, no foul.’

He started to turn. She prodded her fingers harder into his spine. ‘Don’t turn around, I said.’

‘Easy.’ He didn’t sound scared, just really pissed off. Maybe this hadn’t been such a great idea after all. ‘I’m putting my hands down,’ he ground out. ‘I’ve been on the bike all day and I’m beat.’ He lowered his arms.

The seconds ticked by interminably.

Jessie’s heart hammered against her ribcage and sweat pooled between her breasts. Heck, she hadn’t thought this far ahead. Where was Linc? Her fingers were starting to hurt.

‘Where you from? You sound English?’ he said.

‘I think where you’re from is probably a more pertinent question,’ Jessie shot back. No arrogant trespasser was going to charm her.

He leaned forward. Jessie’s heart jolted in her chest. ‘What are you doing?’

‘Grabbing my socks. Any objections?’ The response was measured, calm and condescending.

Jessie bristled. ‘Fine, but next time ask permission.’ Just as she issued the order, her tightly clamped fingers twitched.

The trespasser’s back tensed and his head swung round. Oops!

Jessie jumped back, yelping, as her prey shot up and grabbed her in one quick, furious movement.

‘Let me go,’ she shrieked, struggling to pull her arms free as his large hands clamped on her arms like manacles.

‘The finger routine. I got to hand it to you, I never thought I’d fall for that one.’

Striking blue eyes stared daggers at her out of a face that would have done Michelangelo proud. The man was quite simply beautiful. Jessie gulped, momentarily transfixed, taking in the high, slashing cheekbones, the rakish stubble on his chin and the daredevil scar across his left eyebrow. Adonis or not, his face was as hard as granite. He looked ready to murder someone and from the way his fingers dug into her arms, she knew exactly who it was.

Her heart rate shot up to warp speed. Don’t pass out you silly cow. This is no time to panic. Twisting, Jessie kicked out with her bare foot and connected with his shin.

‘Ow! Stop that you little hellcat,’ he yelled, yanking her towards him and wrapping his arms around her.

‘Let me go. You — You trespasser.’ With her face pressed against the soft curling hair on his chest, the demand came out on a muffled squeak. The smell of fresh, wet male was overpowering. She lifted her knee, intending to stamp on his foot, but before she could make contact, he tensed and shot backwards.

His hands let go. Jessie turned, poised to bolt for freedom, but he grabbed her from behind. Strong arms banded under her breasts and he lifted her off the ground as if she weighed nothing at all. She kicked, frantically, but he was holding her so close, so tight, she couldn’t get any leverage.

Okay, now was the perfect time to panic.