Pleasure, Pregnancy and a Proposition

Kidnapped and forced to take a pregnancy test!

Sexy millionaire aristocrat Luke Devereaux showed up at Louisa’s office, frogmarched her to a doctor and demanded she took a pregnancy test! Much to her complete shock and horror, it was positive!

Nearly three months before, Luke had shown Louisa a night of pleasure she could never have imagined – and would never be repeated. Only the dramatic consequences meant Luke was now demanding marriage – and his proposition came with a tantalising promise: more nights of untold pleasure…?

Best friends Mel and Louisa lead each other into hot trouble … But can they find their happily ever afters with men they never expected to fall for? 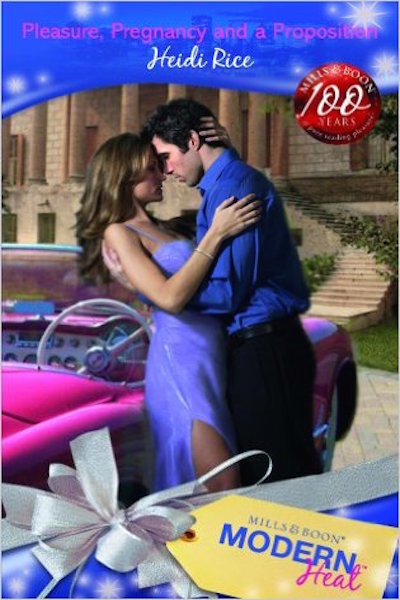 Louisa DiMarco’s fingers paused on the keyboard of her computer at the urgent whisper from her editorial assistant Tracy. ‘I’m on deadline here, Trace.’ she muttered. ‘And I happen to take my work seriously.’

Louisa was a professional. One of Blush magazine’s most popular and well-respected feature writers. Just because this article about the pros and cons of breast enlargement was giving her a headache – what were the pros anyway – she would not be distracted from it because Tracy had spotted some good-looking guy in the office.

‘We’re talking scorching,’ Tracy crooned. ‘You will not want to miss this guy.’

Louisa kept her head down and carried on typing. For about two seconds.

‘For goodness sake!’ She clicked on screen save. ‘All right, one quick peek, but this better be good.’ Surely even a dedicated features writer like herself was entitled to some recreational pursuits on the hottest, stuffiest, most boring Friday afternoon in the history of the world ever.

Louisa peered round her computer to get a better view of the vast open-plan office, not expecting to be impressed. Tracy’s taste in men generally stank. Still even Tracy’s idea of what constituted a hottie couldn’t make Louisa feel as queasy as the pictures she’d been looking at all afternoon. ‘Where is Adonis then?’ she asked.

‘Over there.’ Tracy pointed to the far end of the office. ‘The bloke with Piers,’ she said, her voice hushed in reverence. ‘Isn’t he magnificent? I think I just ovulated.’

Louisa sent her assistant a quick grin. Good to know she wasn’t the only stir-crazy female on the premises. She looked past the desks of journalists typing like crazy on the last Friday before press day and spied two men with their backs to the room by the receptionist’s desk.

Louisa blinked. Tracy hadn’t just surprised her. She’d astonished her. Louisa was the office’s acknowledged hottie connoisseur and even she couldn’t fault the guy. Not from this angle anyway. Tall, dark and broad-shouldered with an expertly tailored navy blue designer suit on, Adonis was making their managing editor Piers Parker, who was at least five foot ten, look like a midget.

‘What do you think?’ Tracy said impatiently.

Louisa tilted her head to one side to get a better look. Even from fifty feet away the man deserved an appreciative purr. ‘Well, he certainly qualifies from the rear,’ she purred. ‘But I think we’d need to see his face to make a final appraisal. As you know, no one enters the DiMarco Hottie Hall of Fame until they’ve passed the face test.’

Standing stiffly with his legs braced apart, Adonis chose that moment to thrust one fist into his trouser pocket. His body language radiated controlled irritation. Louisa didn’t care. The movement had made his jacket rise up over his butt, improving the view even more. Now, if he would just turn around and come a bit closer.

Something teased the edges of Louisa’s memory as she pressed her pen against her bottom lip and waited. She ignored it. This was definitely an improvement on silicone implants.

The clatter of computer keyboards and the buzz of conversation slowly tapered off as every woman in the place became aware of the Armani-clad stranger in their midst. Louisa could almost hear a collective oestrogen-loaded sigh over the hum of expectation.

‘I doubt it, that suit’s new season Armani and Piers is practically genuflecting — which means Adonis is either on the board of directors or he’s in Arsenal’s A-team,’ Louisa whispered back.

Although she wouldn’t be surprised if he was a sportsman with that lean, athletic build, Louisa couldn’t imagine a professional footballer looking so debonair.

Louisa fluffed her hair instinctively. Goodness, she was actually holding her breath. It had been so long since she’d had the urge to flirt she almost didn’t recognise the feeling. How long had it been since she’d felt excited in the presence of a good-looking man?

The errant thought had an image forming that she instantly repressed. Do not go there. Her radar had been spectacularly off that day but it had been over three months ago. Twelve weeks, four days and – she did a quick calculation – sixteen hours to be exact. Luke Devereaux, the handsome, charming Lord of Berwick and bone fide snake in the grass, no longer had the power to upset her. But the prickle of memory developed into a nasty little thorn, scratching at her consciousness.

Louisa’s brow furrowed as Piers turned to point straight at her. How odd. Adonis followed in slow motion, but then a pair of piercing and painfully familiar grey eyes fixed on her face and the little thorn became a jagged blade slicing through the sensual mist.

Louisa’s fingers went numb, her heart thudded like a sledgehammer, all her blood rocketed into her cheeks and the hairs on the back of her neck felt as if a greedy fist had wrenched them out at the roots. And then heat blazed through her body, as the memory she’d been repressing for the last three months hit her like a red-hot slap – strong fingers stroking her, insistent lips fastened on the pulse point in her neck and wave upon glorious wave of orgasm rocketing up from her core.

A tangle of nerves, fury and nausea snaked into a vicious knot in the pit of her stomach.

What was he doing here?

That was no Adonis. The man walking towards her was the Devil incarnate.

‘Wow, he’s coming over here.’ Tracy announced over the pneumatic drill now shattering Louisa’s eardrums. ‘Oh-my-god! Isn’t that Lord What’s-his name. You know, he was in your Britain’s Most Eligible Bachelors list in the May issue. Maybe he’s here to thank you.’

Hardly, Louisa thought bitterly. He’d already exacted his revenge for that list three months ago. Louisa’s spine snapped straight and she folded her legs tightly under her chair. The tap of her high-heeled leather boot against the chair’s stem sounded like the rat-a-tat-tat of a machine gun.

If he was here to take another cheap shot at her, he could forget it.

Louisa had seen him coming this time. He’d used her thrusting nature, her innate flirtatiousness and her incendiary attraction to him against her three months ago. He would never catch her unawares again. This time she would fight back and destroy him. And then she was going to take great pleasure in tap-dancing on his grave.

Luke Devereaux’s long, purposeful strides ate up the acres of industrial blue carpeting as he zeroed in on his prey. He barely noticed the managing editor scuffling along on his heels, or the sea of female faces swivelling round to gawp at him. All his concentration, all his irritation was focussed on one particular female. That she looked as stunningly beautiful as he remembered her — shiny gold-streaked hair framing an angelic face, killer cleavage accentuated by a tight, figure-hugging frock covered in a bold Lichenstein-like cartoon print, and mile long legs encased in knee-high hooker boots – only made him more determined to keep his cool.

Appearances were deceiving. This woman was no angel. What she was planning to do to him qualified as the worse thing a woman could do to a man.

Okay, things had got spectacularly out of hand three months ago. And he had to take a large part of the blame for that. The plan had been to teach her a little lesson about respecting people’s privacy – not take advantage of her the way he had.

But Christ, she deserved a large part of the blame too. He’d never met anyone as reckless and impulsive before in his life. And he wasn’t a bloody saint. When a woman who looked like her, smelt like her and felt like she did had offered what she had offered, what did she think he’d do? Say no thanks? He couldn’t imagine any bloke being able to think clearly under the same circumstances. How could he possibly have known she wasn’t as experienced as she appeared?

Well, one thing was for sure, he was through feeling guilty about his part in it.

After his little chat with their mutual friend Jack Devlin yesterday all his guilt, and all his regrets over what had happened between them had given way to a slow-burning anger.

An innocent life was involved – and he’d do whatever he had to do to protect it.

Whatever hurts, whatever injustices he may have done her in the past, he had no qualms whatsoever about bending her to his will now. And the sooner she realised that, the better.

Louisa DiMarco was about to discover Luke Devereaux never backed down from a fight.

What was it the late, unlamented Lord Berwick had said to him on their first and only meeting all those years ago? ‘What doesn’t kill you makes you stronger, boy.’ He’d learnt that lesson the hard way when he was only seven years old. Frightened and alone in a world he didn’t know and didn’t understand, he’d had to toughen up fast or go under. It was about time the spoilt, self-absorbed and foolhardy Miss DiMarco learnt it too.

To resist the urge, he shoved his hands into his trouser pockets and kept his eyes flat and expressionless. It was a casual, predatory look that he knew terrorised his business opponents. Louisa, he noted, didn’t even flinch.

The adrenaline rush he usually associated with a particularly tough new business challenge surged through his body. Teaching this woman how to face her responsibilities might actually be more of a pleasure than a pain. He was already anticipating the first lesson: getting Louisa to tell him what she should have told him weeks ago.

‘Miss DiMarco, I want a word with you.’