Tycoon Connor Brody has just apprehended an intruder! One clad in lacy satin underwear… And not a trespasser at all, but his feisty neighbour Daisy Dean. The red-hot encounter leaves him aching for more — could the luscious Ms Dean be the answer to his prayers in more ways than one?

Connor needs to safeguard a business deal, and he fully intends to finish what they’ve started. Unable to resist his lethal charm, Daisy finds herself agreeing to two hedonistic weeks in New York — as Connor’s fake fiancée. 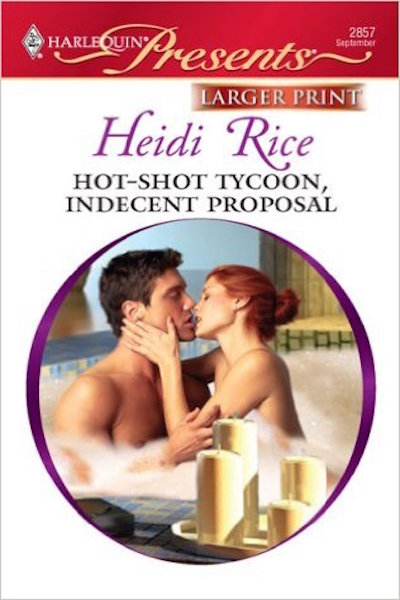 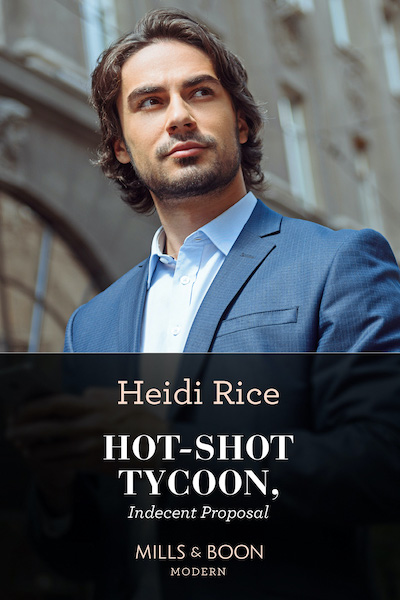 ‘Here kitty, kitty. Come to Daisy. Nice kitty.’ Daisy strained to keep her voice to a whisper as sweat pooled in her armpits and the course wool of the beanie cap made her head itch.

She scratched her crown, pulled the suffocating cap back over her ears and peered into the pitch dark under the hydrangea bush. Was the stupid cat deaf?

And why hadn’t she brought a torch? She huffed. And gave up. This was pointless. She’d almost broken her neck getting over the wall and had then spent ten long minutes searching the garden, gouging her thumb on one of the rose bushes in the process, and she still hadn’t seen a blasted thing. Either the cat wasn’t here or it had already perished.

She crawled out from under the bush, her fingers sinking into the dirt as she tried to avoid squashing any of the plants in the flowerbed.

Roakus barking cut the still night air like a thunderclap. She clasped her hand to her throat and swallowed a shriek.

Her heartbeat kicked in again as she recognised the excited yips. Trust Mr Pettigrew’s Jack Russell Edgar to give her a flipping heart attack — it had to be the most annoying dog on the planet.

She puffed out her cheeks and sucked on her sore thumb. Well, at least she could go back home now knowing she’d done her best to find the Invisible Mr Pootles. Wherever he’d got to, it wasn’t Mr Hot-Shot’s back garden.

She stood, ready to walk back to the wall when the yapping cut off. The sound of a soft pad behind her had her glancing over her shoulder. She spotted the dark silhouette looming over her and had a split second to think. ‘Oh crap.’

A muscled forearm banded around her tummy and hauled her off her feet. Her breath whooshed out as her back connected with a solid wall of hot naked male.

She sucked in a quick breath ready to scream her lungs out, when a large hand slapped across her mouth — smothering her with the scent of sandalwood soap.

‘No you don’t, fella,’ the voice murmured, the hint of Irish in it only making it more terrifying. ‘You’re not calling your mates.’

She struggled against the band around her waist. It didn’t budge.

Lifting her as if she weighed nothing at all, her captor hefted her back towards the house. The soap smell overwhelmed her as she listened to the grunts of her own muffled screams through the powertool now buzzing in her ears.

Daisy’s head began to spin as tomorrow’s tabloid headlines flashed across her mind. Woman smothered to death over missing cat.

She kicked clumsily, connecting with thin air, and the baggy jeans slipped off her hips. Then the arm released and she landed hard on the ground, pitching head first onto the grass. As she scrambled up, a hand grasped the waistband of her jeans and yanked.

‘Hey, what’s with the satin panties?’ came the shocked shout from behind her.

She gasped, blood surging into her head, as she lurched round and hauled the jeans back up to cover herself.

‘Who the hell are you?’ he yelled.

Silhouetted by the porch light, all she could make out of her captor were acres of bare chest, ominously black brows, waves of dark hair and impossibly broad shoulders.

Her whole body vibrated with fury as embarrassment exploded in her cheeks, but all that came out of her mouth was a pathetic yelp.

He reached forward and whipped the beanie cap off her head. She tried to grab for it but her hair cascaded down.

She swiped her hair out of her eyes as outrage overwhelmed her. How dare he manhandle her and scare her half to death. She snatched the cap back. ‘I’m not a girl,’ she snapped, her voice returning at last. ‘I’m a fully grown woman, you big bully.’

He took a step forward, towering over her. ‘So what’s a fully grown woman doing breaking into my house?’

She stumbled back, now holding the trousers in a death grip. Outrage gave way to common sense. What on earth was she doing arguing with the guy? He was twice her size and not in a very good mood if that threatening stance was any indication.

Forget standing her ground. Time to get the hell out of Dodge.

She turned to bolt. Too late — as strong fingers clamped on her arm.

‘I don’t think so, lady. I want some bloody answers first.’

The forward momentum pulled her off her feet. ‘Let me go,’ she squeaked, tugging on her arm. His grip tightened as he dragged her backward up the porch steps.

Panic welled up as he marched her through sliding glass doors into a massive open-plan kitchen. The smell of fresh vanish assaulted her nostrils and light blinded her as he snapped on a switch.

He hauled her past polished oak work surfaces and gleaming glass cabinets to a sunken seating area and shoved her, none too gently, into a leather armchair. ‘Take a seat.’

She went to leap up but he grabbed the arms of the chair, caging her in. Heat radiated from his naked chest like a furnace as did the heady scent of soap and man. She flinched at the fury in his face which was now illuminated in every shockingly masculine detail.

A drop of water from his damp hair splashed onto her sweater. She shrank into the cool leather as the moisture sunk into the fabric and touched her naked breasts.

Ice blue eyes dipped to her chest and her traitorous nipples chose that precise moment to draw into excruciatingly hard points. Heat flared in her face. Why had she taken off her bra? Could he tell?

‘Stay put,’ he snarled, his lazer beam gaze lifting back to her face. ‘Or so help me Jesus, I’ll give you the spanking you deserve.’

She began to shake, her heart wedged in her throat. Up close and rather too personal, the stark male beauty of his face was staggering. Dark slashing brows and angular cheekbones rough with stubble did nothing to detract from the cool, iridescent blue of his eyes, nor the livid white scar twitching against the tensed muscles of his jaw. As his gaze swept over her, she noticed he had the longest eyelashes she’d ever seen.

They ought to have made those arctic eyes look girly. They didn’t.

‘You can’t spank me,’ she whispered, then wished she hadn’t as his eyes darted back to hers.

Daisy heartbeat sped up to warp speed. Do not antagonise him, you silly cow.

He straightened and raked a hand through his hair, pushing the thick black waves back from a high forehead. His gaze slipped to her chest again.

The contempt in his voice was too much. Her temper flared, destroying the vow she’d made moments before. ‘You just scared the crap out of me, Atilla. What the heck do you call that?’

‘You were in my yard. Uninvited,’ he sneered. Not sounding anywhere near as apologetic as he should. ‘What did you expect, a red carpet?’

Before she could come up with a decent comeback, he turned and stalked over to the kitchen’s central aisle. She noticed a curious hitch in his stride. Why was he walking as if he were on a swaying ship?

He bent over the double sink. Her eyes lifted to his back and she stifled a gasp, the question forgotten. A criss-cross of pale ridges stood out against the smooth brown skin of his shoulder blades. Daisy swallowed convulsively.

Whoever this guy was, he was not the rich pampered narcissistic playboy she’d assumed.

Coupled with the mark on his face, the scars on his back proved he’d lived a hard life, marred by violence. Daisy bit into her bottom lip, clasped her hands to stop them trembling and dismissed the little spurt of pity at the thought of how much those wounds must once have hurt.

Do not make him mad, again, Daisy. You don’t know what he might be capable of.

Pleasure, Pregnancy and a Proposition