The Billionaire’s Proposition in Paris

Now he’s in too deep…

Katherine Hamilton is known as a poised, professional event planner, but superrich Conall O’Riordan hires her with revenge in mind. By playing the demanding client and keeping her close, he’ll find out all he needs to know about her no-good half brother!

Inviting Katherine to a lavish ball in Paris is part of Conall’s plan. But he was not counting on their ever-building electricity or the discovery of Katherine’s innocence, which brings him to his knees!

What started out as vengeance is quickly becoming much more complicated…

#1 The Billionaire’s Proposition in Paris: Conall and Katie’s story 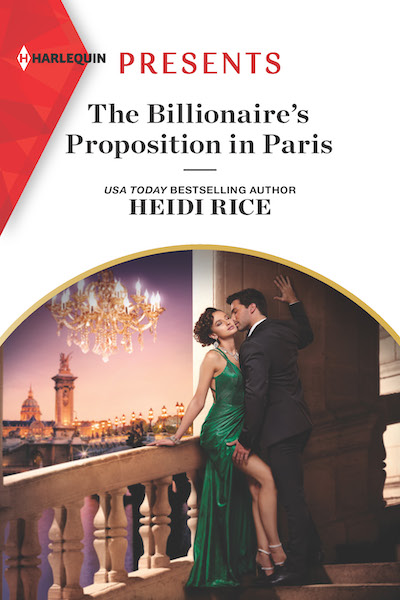 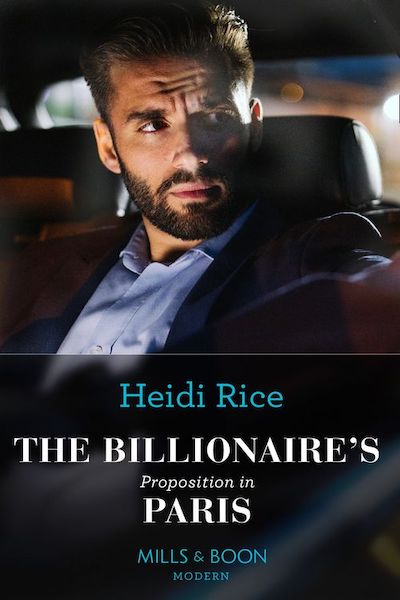 ‘I will need you to be on call twenty-four-seven. If I contact you, I expect you to make yourself available to me immediately…’

But I’m an event planner, not your mistress.

The whispered word—and the inappropriate thought—popped out before Katherine Hamilton could stop either, interrupting the stream of instructions she had been receiving ever since she had been ushered into Conall O’Riordan’s glass-walled office on the thirtieth floor of Rio Corp headquarters in London’s golden mile five minutes ago.

She regretted the impulsive question immediately, when O’Riordan’s dark head rose from the pile of papers on his desk—which he had been signing with efficient flicks of his silver pen as he reeled off his list of requirements—and his scorching blue gaze met hers for the first time.

Her breath backed up in her lungs—the jolt of awareness both shocking and electrifying at the same time.

She’d done her research as soon as she’d been told her fledging event-planning firm was in the running to receive a coveted contract from O’Riordan’s company. She already knew Conall O’Riordan, the agricultural-tech billionaire, was strikingly handsome, renowned for his magnetism, drive, ambition and charisma. She knew he’d come from humble origins to become one of Ireland’s most eligible men at the age of only thirty-one. But nothing could have prepared her for the impact of having that intense cobalt gaze focussed solely on her. Or the heat that slammed into her chest and spread through her body like wildfire.

Uncomfortable sensations she hadn’t felt since Tom’s death. Or, frankly, since before Tom’s death. The wave of sadness which followed the thought of her dead husband helped her to catch her breath and examine her unprovoked reaction to O’Riordan.

Her relationship with Tom had not been a wild passion—not even close. It had been a childhood friendship that had blossomed into love. A love they’d never consummated. Physical intimacy had been the least of the things they’d lost when Tom had become ill. Did that explain her shocking reaction to O’Riordan––her chronic lack of sexual experience?

O’Riordan’s brows rose as his lips flattened into a line but the intensity in his gaze didn’t dim one iota… Could he feel it too––the shot of adrenaline turning her insides to mush?

‘Did you say something, Ms Hamilton?’ O’Riordan asked, or rather demanded, his husky tone, low with command, only increasing the devastating prickle of awareness.

Breathe, you ninny! And stop staring at his lips.

Katie struggled to collect herself and her shattered equilibrium.

This commission could be a game-changer for her company and life-changing for her. It was an opportunity she’d spent the last forty-eight hours prepping for with her team. She had a folder full of ideas propped next to her chair that they’d killed themselves to produce in record time, ever since receiving word of this interview from one of O’Riordan’s management staff.

But, if she were to take this commission, they needed to establish some kind of working relationship—her shockingly inappropriate reaction notwithstanding.

She wasn’t sure she liked the way O’Riordan had rattled off a string of outrageous demands. He hadn’t even mentioned the event itself yet—which she had been briefed was a team-building week followed by a company reception in O’Riordan Enterprises’ Dublin headquarters.

‘I… I wondered why you would need me to be available to you twenty-four-seven?’ she managed.

‘This is a problem?’ he asked, his gaze raking over her with a raptor-like focus that only made her more aware of the wildfire still rushing over her skin.

Katie drew in a steadying breath.

He’s just an extremely attractive and powerful man. It’s instinctive. The female of the species is hard-wired to respond to the alpha male. It just means you’re still human. Still alive. Still a woman. No biggie.

‘No, not exactly, it’s just…’ she began, attempting to fill the awkward silence. ‘Usually when I accept a commission I work up an event plan, then you and I and my team discuss it, and then—once you’re entirely happy with everything—my team and I take over…’ She paused, aware his focussed gaze was making her babble.

Was he trying to unnerve her? Because it was definitely working.

‘It’s my job to handle all the details,’ she continued. ‘So, basically, I wouldn’t be doing my job properly if you felt you had to contact me in the middle of the night,’ she finished, finally managing to get to something resembling a point.

He placed his pen on top of the papers he’d been signing. But then his lips quirked. It wasn’t a smile, exactly, closer to a sneer. Unfortunately, it only made that striking combination of intensity and dark masculine beauty more breath-taking.

‘I run an international company, Ms Hamilton. We’re currently involved in projects in eight different time zones and I travel extensively. What is the middle of the night for you might be the middle of the day for me. I also never sleep more than three or four hours a night,’ he added, then frowned, perhaps because he’d given away a piece of personal information. She shifted in her chair, the rush of sympathy at the admission he had insomnia as inappropriate as all the other sensations that had assailed her since she’d walked into his inner sanctum.

‘If I have a question about the event,’ he continued, having recovered from the slip a lot quicker than she had, ‘I will want it answered. Immediately. By you. Not one of your staff,’ he clarified, the tone both condescending and laser-sharp. ‘If that kind of availability is a problem for you, we can end this interview now.’

‘It’s not a problem,’ she said instantly. ‘I can be available if you need me to be. I’m just saying that shouldn’t be necessary,’ she added, aware she wanted this commission now more than ever, and not for entirely professional reasons.

Conall O’Riordan presented a challenge. Not just for her company but also for her. A challenge she had managed to avoid ever since Tom’s death five years ago. Because in many ways she’d been dead too. She still wasn’t ready to consider dating again. But navigating an inappropriate sexual attraction to a client—especially a client of Conall O’Riordan’s calibre—was all part of the process of returning to the land of the living. Surely?

‘Good, as long as we understand each other,’ he said.

The tight feeling in Katie’s chest released—a little. Her physical attraction to this man was nothing to be afraid of. Especially as there was no way on earth she’d ever act upon it. And no chance whatsoever that O’Riordan would ever see her in that way. From the copious research she’d done on him in the last forty-eight hours, she knew his dating history consisted mostly of supermodels and actresses and assorted other women who looked as sensational as he did.

She reached for the folder by her chair, desperate to direct their conversation back to where it needed to be. ‘Would you like to see the concepts we were asked to put together for the event?’ she asked, standing to place the folder on his desk. ‘I understand it’s for a week-long team-building event at your headquarters in––’

‘Excuse me?’ She folded her arms over the portfolio and stood dumbly, staring at him, panic joining the unwelcome sensations still shimmering through her body.

Had Caroline Meyer, her assistant, got the details of the brief wrong? Surely not? Caro was brilliant, she didn’t make mistakes. And, anyway, they’d spent forty-eight hours with very little sleep putting together this portfolio. If they’d got the brief wrong, there was no way he was going to give her this commission and all their work would have been wasted.

But, before she had a chance to spiral into a full-blown anxiety attack, he gestured for her to sit back down.

‘I had you deliberately misinformed about the brief.’

‘But…why?’ she asked, not sure whether to be annoyed or astonished.

‘Because I value my family’s privacy, and I don’t want information about the actual event or its location being leaked to the press. I’ll expect you to sign an NDA before I hire you.’

‘I…I understand,’ she said, although she really didn’t. Maintaining a client’s privacy was part of any reputable event planner’s DNA. Leaking that kind of information could destroy a company’s reputation, especially a company like hers, which was hoping to plan exclusive, boutique events for a high-end clientele.

‘Of course. I’ll be more than happy to sign an NDA if that’s what you require.’ After all, it was just another of his unnecessary demands.

She knew how taciturn and demanding men like Conall O’Riordan could be, because her half-brother, Ross De Courtney, owned and ran the biggest logistic firm in Europe. Maybe Ross wasn’t self-made like O’Riordan, having inherited De Courtney’s from their late father. But Ross had the same drive and ambition, having grown the company’s status and reach exponentially in the ten years he’d been its CEO, and he had the same demanding, inflexible personality.

But she’d never had to organise an event for Ross. She hadn’t even been a part of his life for five years, ever since their epic falling out over her marriage.

‘What you feel for Tom isn’t love, it’s pity, Katie. You’re nineteen. I refuse to give you my permission to do something so ludicrous. And I’m certainly not paying for a wedding.’

She swallowed the lump of anxiety that always surfaced when she thought of the angry words they’d exchanged, and how easy it had been for Ross to cut her out of his life. Just like their father…

Katie sliced off that unhelpful memory before it could take root, knowing it would only make her feel shakier.

So not the time, Katie.

One Wild Night with Her Enemy