Find out exactly what happens when rivals become passionate lovers in this idyllic island romance.

The stakes are sky-high
In business and in the bedroom!

Executive assistant Cassie James has orders to attend a glitzy wedding to spy on Luke Broussard. She realizes that while the tech tycoon is ultra-arrogant, he’s also aggravatingly irresistible. Before Cassie knows it, they’re jetting off to his private island—and her first ever night of passion!

When Luke uncovers Cassie’s original intentions, he’s furious. To stop her damaging his self-built empire, he demands she stay for a week. After all, attraction this intense still deserves indulging. But is she a bigger threat to his business…or his carefully guarded heart?

From Harlequin Presents: Escape to exotic locations where passion knows no bounds.

Hot Summer Nights with a Billionaire:

#1: One Wild Night with Her Enemy by Heidi Rice

#2: The Flaw in His Red-Hot Revenge by Abby Green 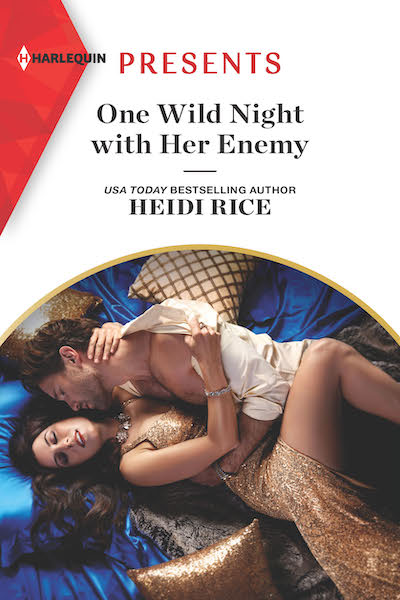 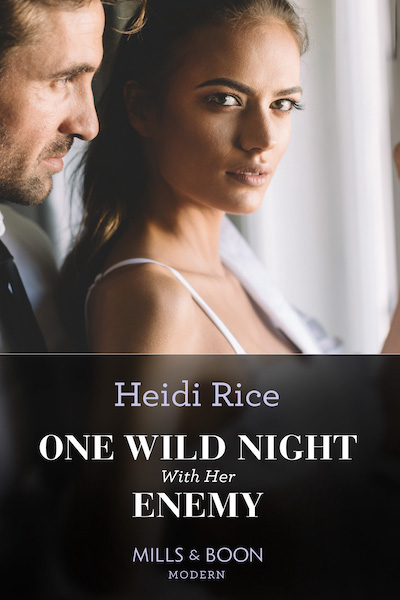 Luke Broussard took another sip from his beer and continued to watch the woman standing on the opposite side of the arbour as she finished texting, switched off her phone and tucked it back in her purse. Her gold dress shimmered in the dusky orange light as the sun sank into San Francisco Bay, accentuating her high breasts and slender neck.

He’d spotted her twenty minutes ago, busy fending off all the eligible heterosexual bachelors, as soon as he’d arrived at this wedding in the Botanical Gardens. That stunning dress and the even more stunning figure it displayed had been turning heads ever since.

But it wasn’t her body which had snagged his attention. Not entirely, anyway.

He sipped the cold brew again, to douse the low-grade fire in his pants which was calling him a liar.

Nah, the thing that had really intrigued him was the fact that he didn’t recognise her. And he was pretty sure he knew all the available women on the West Coast scene, because he’d either dated them or they’d hit on him.

Who the heck is she?

At first he’d wondered if she’d crashed the event. He’d crashed enough of these things himself, when he’d been starting out and trying to get funding for Broussard Tech’s first prototypes, to make the thought fire his imagination and his libido.

As he’d observed her, though, he’d discarded that idea. She looked way too elegant and aloof to be here without an invitation.

Which only made her more fascinating.

Her unattainable, ethereal beauty reminded him of the girls he’d never been good enough for in high school. The rich, fancy, privileged girls from the right side of the tracks who had been eager to make out with him after-hours on a game night, but had ignored him the next day in class because he’d lived in a trailer park, had a deadbeat for a father, worked two jobs and still hadn’t been able to afford the latest high-tops.

Those memories amused him now he was worth billions and change.

But could that explain why the woman in gold had captured his attention? Did she represent a chance to relive those old high school humiliations and win? No woman was unattainable to him now. Not even one as stunning as her.

He gulped his beer as he noticed her chewing her bottom lip. Maybe she wasn’t as aloof and composed as she seemed. He continued to study her. She actually looked kind of tense. Not aloof so much as uncomfortable.

Interesting. He hated these types of events, too.

He tugged at his shirt collar and dragged off the tie which had been strangling him ever since the happy couple had said their vows five minutes ago. He shoved the tie in his pocket. If the two grooms hadn’t once saved him from complete social isolation in college he wouldn’t have come to this event either, but now he was here he was glad he hadn’t dodged it. And not just because hearing Matt and Remy make their vows had been so touching.

When was the last time a woman had demanded his attention?

The mystery lady in gold stopped chewing her lip to chew the edge of her thumbnail, then stiffened. She drew her hand down to clutch the purse resting on her hip.

Another guy approached her. Luke tensed.

Back off, buddy, she’s mine.

The possessive thought came out of left field.

He’d stopped letting his libido make decisions for him ever since those nights under the bleachers. These days he had his security team check out anyone he was considering dating to ensure he didn’t hook up with women who were more interested in his platinum credit rating than his make-out skills.

The only problem was, that had taken all the fun out of the chase.

His heartrate spiked as the mystery girl gave the guy—whom he recognised as a rival tech company’s CEO—the brush-off. For the first time in a long time he felt the heady adrenaline rush which meant he wanted to stop watching and start finding out more about this woman… A lot more.

He dumped his beer on the tray of a passing waiter, scooped up a couple of glasses of fancy fizz and strode past the arbour towards her.

To hell with the security check.

Whoever she was, she was the first woman to snag his interest in way too long for him to remember—which gave her considerable cachet in the jaded world of billionaire hook-ups.

Plus, there was nothing he loved more than a mystery that needed to be solved.

As he drew closer she looked directly at him, like a deer sensing the approach of a hunter. Their gazes collided and her eyes—hazelnut-brown shot through with flecks of gold that matched her dress—popped wide. With recognition or surprise or arousal, he couldn’t be sure.

The shimmering gold fabric hugged the round weight of her breasts, making them look even more spectacular up close.

Is she wearing a bra?

His breath backed up in his lungs.

She really was exquisite—much more refined and beautiful than any of the girls he’d hooked up with in high school. He forced his wayward gaze back to her face. The flush of reaction—and guilty knowledge—highlighted her pale cheeks.

Arousal for sure, then. And recognition. And something else he couldn’t decipher—but he would.

Lust fired through his bloodstream and hit his groin like a missile.

He handed her the champagne glass and gave himself a mental high-five when she took it. He wanted her more than he’d wanted any woman in a while. And before the night was over he intended to have her—after all, his make-out skills had improved considerably since high school, and he’d never had a problem getting any girl he wanted even when he’d been the boy good girls were warned to stay away from.

But first he was more interested in uncovering all the fascinating secrets lurking in those big, beautiful and guarded eyes.

‘Drink up, cher,’ he said, laying on the Cajun manners his mama had drummed into him as a kid. ‘Whatever you said to Dan Carter to send him packing,’ he added, clinking his glass against hers as he mentioned the CEO she’d just given the bird, metaphorically speaking, ‘I salute you. The guy’s an entitled jerk. I have it on good authority.’

Luke Broussard! In the flesh.

‘You… You do?’ Cassie spluttered, taking a gulp of the champagne the man she’d been discreetly trying to locate in the crowd had just handed to her.

He tapped his nose, his firm, sensual lips stretching into a grin so full of laid-back hotness she could feel the effect right down to her toes—even in the heeled sandals which had been punishing her feet for over an hour.

Funny thing… She couldn’t feel the pain any more as she became fixated on that seductive smile—full of confidence, and heat, and rueful amusement…and directed squarely at her. As if they were sharing a particularly good joke.

Although that couldn’t be right.

She tried to get her jet-lagged brain back into gear.

Was this actually happening? Or was she imagining it out of desperation and fatigue and the Aperol Spritz she’d chugged down too quickly as she’d struggled to relax enough to make small talk?

She’d been at the wedding for what felt like an eternity, and there had been no sign of Luke Broussard and no one who knew him had seemed willing to talk about him. But Ashling’s dress choice had worked its magic—or rather its curse—because she’d been approached by a selection of increasingly pushy guys, the last of whom had asked her point-blank if she’d like to spend the night on his yacht.

She’d met enough American men in business to know they could often be staggeringly forthright, but the leer in that man’s eyes had made her feel unclean.

Luke Broussard’s eyes, though—a striking emerald changing to a deep forest-green around the rim of his irises—were full of something a great deal more dangerous to her peace of mind… Not to mention her breathing… Because the look in them had triggered an urge to step closer to him, to gather the hint of his clean scent—pine soap overlaid with man—and bask in the mocking approval in his expression. Which could not be good.

His husky American accent sounded different from the others she’d heard this evening too. Slower, deeper, less sharp, the soft purr brushing over her skin and making it tight and achy.

The snapped, mostly blurred shots she’d found of him on the internet hadn’t done him justice. He’d seemed conventionally handsome in those pictures, but in person his features were more rugged and a great deal more breathtaking. The strong jaw, darkened with the first hint of stubble, was matched by a prominent nose and chiselled cheekbones. His left brow was rakishly bisected by a piratical scar, and his dark wavy hair looked as if he’d missed his last few appointments at the barbers.

The hint of a tattoo on his collarbone—was that barbed wire?— revealed by the open collar of his shirt, only added to the aura of raw masculinity, untamed and defiant, and as out of place in this exclusive setting as she was… But for entirely different reasons.

The shock of having him walk up to her so boldly gave way to curiosity—and that odd yearning which she’d have to examine later. Much later.

For goodness’ sake, Cassie, say something smart and erudite. Draw him out. Don’t stare at him like a dummy.

The Billionaire’s Proposition in Paris
Scroll to top