On the First Night of Christmas

1. ‘Tis the season to be daring: Find the perfect Mr. Right Now (extra points for a bad-boy-turned-billionaire) and be brave about getting him—even if that means jumping straight into sexy Jace Ryan’s car!

2. Enjoy the ride: Once you’ve chosen your man, get swept away by the moment! For once, Cassie’s determined to stop worrying about the future, but she must remember one thing….

3. This fling is just for Christmas: Jace Ryan’s a seasonal special. Do not start falling for him, Cassie, no matter how perfect the package or how much you’ve enjoyed unwrapping it….

Reprinted in: Misbehaving Under the Mistletoe 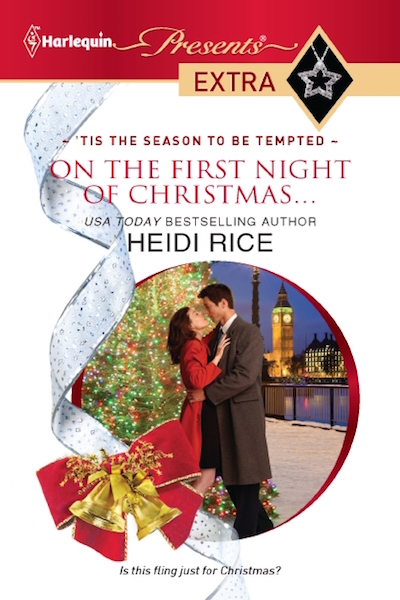 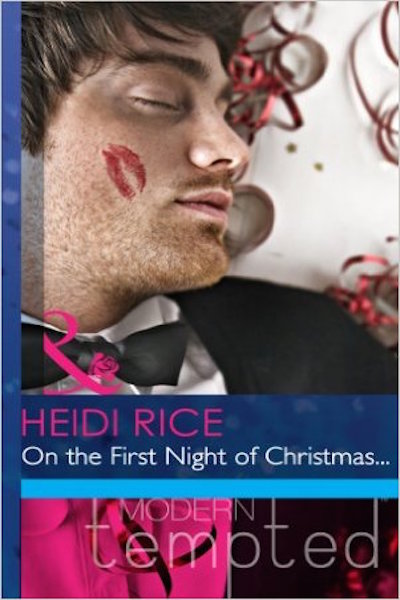 If only my love life was as perfect as Selfridges at Christmas.

Cassie Fitzgerald let out a wistful sigh as she gazed at the explosion of festive bling in the iconic London store’s window display. The Sugar Plum Fairy sparkled flirtatiously on the shoulder of a hunky manikin dressed in a Ralph Lauren dinner suit, silver snowflake lights making her tiny wings twinkle. Cassie’s heart lifted. Selfridges’ Christmas window dressing never let you down. It always captured the hope and expectation of the season of good will so beautifully. And okay, maybe her love life wasn’t perfect — in fact it was non-existent — but that was still a big improvement on last year.

A frown creased Cassie’s brow as she recalled the Christmas wish she’d made the year before while standing in front of Selfridges — involving Lance, her boyfriend of three years, and a proposal of marriage.

She wrinkled her nose in disgust, the frozen air making it tingle, as her mind conjured up the image of Lance and Tracy McGellan getting up close and pornographic on the sofa in Cassie’s flat a month after Valentine’s Day. A month after Cassie had accepted that wished-for proposal.

Colour hit her cheeks as she remembered her shock and disbelief, swiftly followed by the shame of her own idiocy.

What on earth had possessed her to agree to marry a deadbeat like Lance?

As Christmas wishes went, it was one of her worst. Right up there with wishing for a pair of inline skates when she was eight — which had resulted in a broken wrist and four hours in accident and emergency on Christmas day. Marriage to Lance would have been worse, but in her typically romantic fashion she’d overlooked all his shortcomings, determined to convince herself that he was The One.

Cassie hunched her shoulders against the brisk winter wind. From now on she was going to stop looking at life through rose-tinted glasses… Because all it did was blind her to reality. And she wasn’t making a Christmas wish this year, because it might come true.

It would be a shame not to have anyone to wake up with this Christmas morning — and she’d been in a funk about it for days. She adored bounding out of bed, brewing a pot of spiced apple tea and then savouring the presents artfully arranged under the tree. Having to do all that alone wasn’t quite the same. But as her best friend Nessa had pointed out, Cassie was better off doing it alone than with Lance the loser. Cassie huddled in her coat. Absorbing the bright sparkle of Sugar Plum and her beau, she let the thought of her lucky escape from Lance strengthen her resolve.

‘What you need is a candy man — to give your girly bits a wake-up call. Then you wouldn’t need another deadbeat boyfriend.’

Cassie’s lips edged up as she recalled Nessa’s use-him-then-lose-him advice when they’d chatted on the phone that morning. Sometimes she really wished she could be as pragmatic about sex as Nessa. If she could just take sex a little less seriously, maybe she could have some fun, without getting tangled up with creeps like Lance.

Biding goodbye to Sugar Plum and Ralph, Cassie jostled her way to Bond Street tube. Frantic shoppers herded in and out of the shops along Oxford Street on a mission to buy all those essential last-minute items that would make their Christmas complete. Stopping at the curb as the traffic barrelled past on one of the cross streets, Cassie squeezed her eyes shut and fantasised about her candy man. Hot, hunky and devoted to making her feel fabulous, he would be magically gone by the New Year — so she’d never have to spend time picking his socks up off the bathroom floor, or washing the dirty dishes he left piled in the sink, or persuading herself she was in love with him.

Her errogenous zones zinged pleasantly for the first time in months.

She opened her eyes as the roar of a car engine interrupted the warm, fuzzy glow. Then shrieked as a tsunami of freezing water slammed into her. The elderly gentleman next to her muttered ‘bloody inconsiderate,’ as a puddle the size of the Atlantic sluiced back into the gutter, and a sleek black car sped past.

Cassie gasped. The warm, fuzzy glow replaced by ice-cold shock. ‘What the…!’

The driver hadn’t even stopped. What a prize jerk.

Flinging her bag over her shoulder, she turned to glare at the vehicle which had braked at the crossing ten feet away. Her fingers curled into tight fists at her sides.

Normally, she would have let the matter pass. Normally, she would have chalked the drenching up to bad luck and assumed the driver hadn’t meant to splash her. But as she stood there, the other shoppers edging past her and gawping at the huge wet patch on her favourite coat as if she had a contagious disease, she felt something new and liberating surging up her torso.

Whether he’d meant to do it or not, she was soaked. And she wasn’t going to just stand by and take whatever life had to throw at her anymore.

Dodging through the crowd, she drew level and rapped on the passenger window. ‘Hey, Ebenezer.’

The tinted glass slid down with an electric hum. She blinked, the zing tingling back to life as a man peered out from the shadows on the driver’s side. Dark hair swept back from a broodingly handsome face accented by a strong jaw and hollow, raw-boned cheeks. She felt the odd jolt of recognition as the scent of new leather wafted out of the car. Did she know him?

‘What’s the problem?’ he demanded.

Clammy water dripped down inside Cassie’s boots and kick-started her tongue — and her indignation.

‘You’re the problem. Look what you did to me.’ She held up her arms to show him the extent of the damage, ruthlessly silencing the zing. He might have a striking face, but his manners sucked.

He swore softly. ‘Are you sure that was me?’

The blare of a car horn had Cassie glancing at the lights. Green. ‘Of course, I’m sure.’
The horn blared again. Longer and angrier this time.

‘I can’t stop here.’ He straightened back into the shadows and Cassie saw his hand grasp the gear shift.

No way, Pal. You are not driving off and leaving me in a puddle on the pavement.

Yanking the heavy door open, she launched herself into the passenger seat.

‘Hey!’ he said, as she slammed the door behind her. ‘What the hell do you…’

‘Just drive, Sir Galahad.’ She pinned him with her best disgusted look. ‘We can discuss your crummy behaviour when you find somewhere to stop.’

His dark brows drew down, the piercing emerald of his irises glittering with annoyance.

‘Fine.’ He slapped up the indicator, shifted into first. ‘But don’t drip on the upholstery. This is a rental.’

The car purred to life, and a blast of heat wrapped around Cassie engulfing her in the subtle aroma of man and leather — and wet velvet. Her heart careered into her throat as the flicker of Selfridges’s fairy lights disappeared from her peripheral vision — and the surge of adrenaline that had propelled her into the car smacked head first into her survival instinct.

She was sitting in a complete stranger’s car being driven to who knew where — which probably rated a perfect ten on the ‘too stupid to live’ scale.

‘Actually, forget it.’ She grasped the door handle.

The driver pulled to a stop at a loading bay. ‘So it wasn’t me after all.’

Cassie’s fingers stilled on the handle at the accusatory tone and her common sense dissolved in a haze of outrage. ‘It was definitely you.’ She glared at him over the gear shift. ‘Don’t you know it’s Christmas?’ She announced. ‘Show a bit of respect for the season and stop being such a jerk.’

Typical. When Cassie Fitzgerald is on the hunt for a candy man, what does she get? A candy man with a crappy attitude.

Jacob Ryan cranked up the handbrake, slung his arm over the steering wheel and stared at the furious pixie in his passenger seat whose wide violet eyes were shooting daggers at him.

How the hell did I end up with Santa’s insane little helper in my car?

The Good, the Bad and the Wild
Scroll to top