1. Her ex-husband could take half of her business

2. She’s actually still married to him!

When she jets off to New York, divorce papers in hand, Xanthe is prepared for the billionaire bad boy’s slick offices… but not for the spear of lust that hits her the moment she sees Dane Redmond again! Has her body no shame, no recall of the pain he caused? But Dane is stalling… Is he really checking the fine print or planning to stir the smouldering embers of their passion and tempt her back into the marriage bed?

Rereleased Nov 2021 in the UK in Islands Escapes: Seduction at Sea 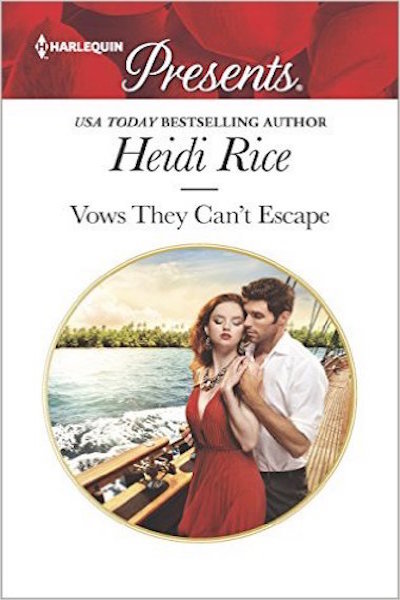 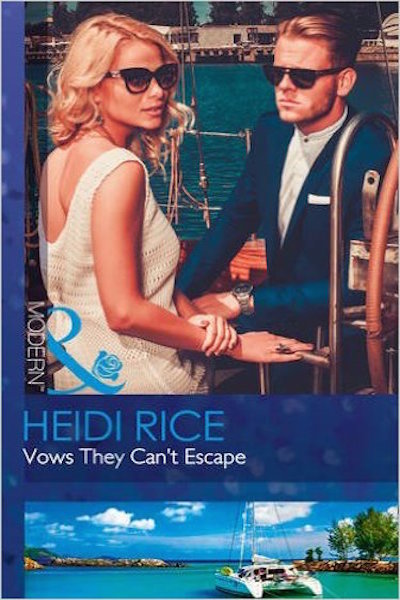 Xanthe Carmichael strode into the gleaming steel and glass lobby of the twenty-six-storey office block housing Redmond Design Studios on Manhattan’s West Side, satisfied that the machine gun taps of her heels against the polished stone flooring said exactly what she wanted them to say:

Watch out, boys, woman scorned on the warpath.

Ten years after Dane Redmond had abandoned her in a seedy motel room on the outskirts of Boston, she was ready to bring the final curtain crashing down on their brief and catastrophic liaison.

So the flush that had leaked into her cheeks despite the building’s over-efficient air-conditioning and the bottomless pit opening up in her stomach could take a hike.

After a six-hour flight from Heathrow, spent power-napping in the soulless comfort of Business Class, and two days and nights figuring out how she was going to deal with the unexploded bomb the head of her legal team, Bill Spencer, had dropped at her feet on Wednesday afternoon, she was ready for any eventuality.

Whatever Dane Redmond had once meant to her seventeen-year-old self, the potentially disastrous situation Bill had uncovered wasn’t personal any more—it was business. And nothing got in the way of her business.

Carmichael’s, the two-hundred-year-old shipping company which had been in her family for four generations, was the only thing that mattered to her now. And she would do anything to protect it and her new position as the majority shareholder and CEO.

‘Hi, I’m Ms Sanders, from London, England,’ she said to the immaculately dressed woman at reception, giving the false name she’d instructed her PA to use when setting up this meeting. However confident she felt, she was not about to give a bare-knuckle fighter like Dane a heads-up. ‘I have an appointment with Mr Redmond to discuss a commission.’

The woman sent her a smile as immaculate as her appearance. ‘It’s great to meet you, Ms Sanders.’ She tapped the screen in front of her and picked up the phone. ‘If you’d like to take a seat, Mr Redmond’s assistant, Mel Mathews, will be down in a few minutes to escort you to the eighteenth floor.’

Xanthe’s heartbeat thudded against her collarbone as she re-crossed the lobby’s atrium under the life-size model of a huge wing-sail catamaran suspended from the ceiling. A polished brass plaque announced that the boat had won Redmond Design a prestigious sailing trophy twice in a row.

She resisted the urge to chew off the lipstick she’d applied in the cab ride from JFK.

Bill’s bombshell would have been less problematic if Dane had still been the boy her father had so easily dismissed as ‘a trailer trash wharf rat with no class and fewer prospects’, but she refused to be cowed by Dane’s phenomenal success over the last decade.

She was here to show him who he was dealing with.

But, as she took in the ostentatious design of Dane’s new headquarters in New York’s über-hip Meatpacking District, the awe-inspiring view of the Hudson Bay from the lobby’s third floor aspect, and that beast of a boat, she had to concede the meteoric rise of his business, and his position as one of the world’s premier sailing boat designers didn’t surprise her.

He’d always been smart and ambitious—a natural-born sailor more at home on water than dry land—which was exactly why her father’s estate manager had hired him that summer in Martha’s Vineyard, to run routine maintenance on the small fleet of two yachts and a pocket cruiser her father kept at their holiday home.

Running routine maintenance on Charles Carmichael’s impressionable, naïve daughter had been done on his own time.

No one had ever been able to fault Dane’s work ethic.

All that energy and purpose had drawn her to him like a heat-seeking missile. That and the super power they’d discovered together—his unique ability to lick her to a scream-your-lungs-out orgasm in sixty seconds or less.

She propped her briefcase on a coffee table and sunk into one of the leather chairs lining the lobby.

Whoa, Xan. Do not think about the super power.

Crossing her legs, she squeezed her knees together, determined to halt the conflagration currently converging on the hot spot between her thighs. Even Dane’s super power would never be enough to compensate for the pain he’d caused.

She hid the unsettling thought behind a tight smile as a thirty-something woman headed in her direction across the ocean of polished stone. Grabbing the briefcase containing the documents she had flown three thousand miles to deliver, Xanthe stood up, glad when her thighs remained virtually quiver-free.

Dane Redmond’s not the only badass in town. Not any more.

Xanthe was feeling less like a badass and more like a sacrificial lamb five minutes later, as the PA led her through a sea of hip and industrious young marketing people working on art boards and computers on the eighteenth floor. Even her machine gun heel-taps had been muffled by the industrial carpeting.

The adrenaline which had been pumping through her veins for forty-eight hours and keeping her upright slowed to a crawl as they approached the glass-walled corner office and the man within, silhouetted against the Jersey Shoreline. The jolt of recognition turned the bottomless pit in her stomach into a yawning chasm.

Broad shoulders and slim hips were elegantly attired in steel-grey trousers and a white shirt. But his imposing height, the muscle bulk revealed by the shirt’s rolled-up sleeves, the dark buzz cut hugging the dome of his skull, and the tattoo that covered his left arm down to his elbow did nothing to disguise the wolf in expensively tailored clothing.

Sweat gathered between Xanthe’s breasts and the powder-blue silk suit and peach camisole ensemble she’d chosen twelve hours ago in London, because it covered all the bases from confident to kickass, rubbed against her skin like sandpaper.

The internet hadn’t done Dane Redmond justice. Because the memory of the few snatched images she’d found yesterday while preparing for this meeting was comprehensively failing to stop a boulder the size of an asteroid forming in her throat.

She forced one foot in front of the other as the PA tapped on the office door and led her into the wolf’s den.

A flicker of stunned disbelief softened his rugged features before his jaw went rigid, making the shallow dent in his chin twitch. The searing look had the thundering beat of Xanthe’s heart dropping into that yawning chasm.

Had she actually kidded herself that age and money and success would have refined Dane—tamed him, even—or at the very least made him a lot less intense and intimidating? Because she’d been dead wrong. Either that or she’d just been struck by lightning.

‘This is Ms Sanders from—’

‘Leave us, Mel.’ Dane interrupted the PA’s introduction. ‘And shut the door.’

The husky command had Xanthe’s heartbeat galloping into her throat to party with the asteroid, reminding her of all the commands he’d once issued to her in the same he-who-shall-be-obeyed tone. And the humiliating speed with which she’d obeyed them.

‘Hold on tight, this is gonna be the ride of your life.’

‘I take care of my own, Xan, that’s non-negotiable.’

The door closed behind the dutiful PA with a hushed click.

Xanthe gripped the handle on her briefcase with enough force to crack a nail and lifted her chin, channelling the smouldering remains of her inner badass that had survived the lightning strike.

She would not be derailed by a physical reaction which was ten years out of date and nothing more than an inconvenient throwback to her youth. It would pass. Eventually.

His thinly veiled contempt at her deception had outrage joining the riot of other emotions she was busy trying to suppress.

The searing gaze wandered down to her toes, the insolent appraisal as infuriating as the fuses that flared to life in every pulse point en route.

‘I don’t do business with spoilt little rich chicks.’

His gaze rose back to her face, having laid waste to her composure.

‘Especially ones I was once dumb enough to marry.’

So Now You’re Back

Tempting the Deputy
Scroll to top