Unfinished Business with the Duke

The one who got away…

Long ago, Issy Helligan lost her virginity to gorgeous aristocrat and rebel Giovanni Hamilton. Then he left without a backward glance and Issy was heartbroken.

Now, years later, she’s doing just fine. Well, perhaps performing singagrams is not her first-choice career, but needs must. And who should be there to bear witness to her humiliation? Gio Hamilton. Looking more gorgeous than ever. And now he steps into the fray, rescues her, ravishes her senseless, and offers to solve all her money worries. There’ll be no ‘for ever’ with this guy, so is he too good to be true…. Or simply too delicious to refuse?

Included in the UK anthology: With Love from Florence – out April 2020

Reprinted in: Back in His Bed 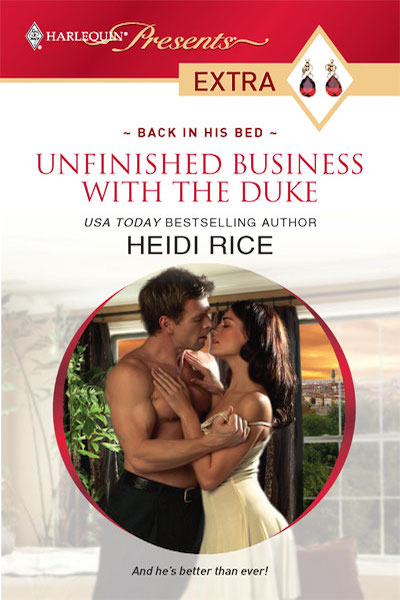 The six-inch stiletto heels of Issy Helligan’s thigh-high leather boots echoed like gunshots against the marble floor of the Mayfair gentlemen’s club. The sharp rhythmic cracks sounded like a firing squad doing target practice as she approached the closed door at the end of the corridor.

She huffed and came to a stop. The gunshots cut off, but her stomach carried right on going, doing a loop the loop and then swaying like the pendulum of Big Ben. Recognising the symptoms of chronic stage fright, Issy pressed her palm to her midriff as she focussed on the elaborate brass plaque announcing the entrance to the East Wing Common Room.

Calm down. You can do this. You’re a theatrical professional with seven years experience.

Detecting the muffled rumble of loud male laughter, she locked her knees as a thin trickle of sweat ran down her back beneath her second-hand Versace mac.

People are depending on you. People you care about. Getting ogled by a group of pompous old fossils is a small price to pay for keeping those people gainfully employed.

It was a mantra she’d been repeating for the past hour — to absolutely no avail.

After grappling with the knot on the mac’s belt, she pulled the coat off and placed it on the upholstered chair beside the door. Then she looked down at her costume — and Big Ben’s pendulum got stuck in her throat.

Blood-red satin squeezed her ample curves into an hourglass shape, making her cleavage look like a freak of nature. She took a shallow breath and the bustier’s underwiring dug into her ribs.

She tugged the band out of her hair, and let the mass of pre-Raphelite curls tumble over her bare shoulders as she counted to ten.

Fine, so the costume from last season’s production of The Rocky Horror Picture Show wasn’t exactly subtle, but she hadn’t had a lot of options at such short notice — and the man who had booked her that morning hadn’t wanted subtle.

‘Tarty, darling, that’s the look I’m after,’ he’d stated in his cut-glass Etonian accent. ‘Rodders is moving to Dubai and we plan to show him what he’ll be missing. So don’t stint on the T and A, sweetheart.’

It had been on the tip of Issy’s tongue to tell him to buzz off and hire himself a stripper, but then he’d mentioned the astronomical sum he was prepared to pay if she ‘put on a decent show’ — and her tongue had gone numb.

After six months of scrimping and saving and struggling to find a sponsor, Issy was fast running out of ways to get the thirty grand she needed to keep The Crown and Feathers Theatre Pub open for another season. The Billet Doux Singergram Agency had been the jewel in the crown of her many fund-raising ideas. But so far they’d had a grand total of six bookings — and all of those had been from well-meaning friends. Having worked her way up from general dogsbody to general manager in the last seven years, everyone at the Theatre was looking to her to make sure the show went on.

Issy sighed, the weight of responsibility making her head hurt as the corset’s whalebone panels constricted around her lungs. With the bank threatening to foreclose on the Theatre’s loan any minute, feminist principles were just another of the luxuries she could no longer afford.

When she’d taken the booking eight hours ago, she’d been determined to see it as a golden opportunity. She’d do a tastefully suggestive rendition of Life Is a Cabaret, flash a modest amount of T and A and walk away with a nice healthy sum to add to The Crown and Feathers’ survival kitty, plus the possibility of some serious word-of-mouth business. After all, the Mayfair club was one of the most exclusive gentlemen’s clubs in the world, boasting Princes, Dukes and Lords of the Realm, not to mention Europe’s richest and most powerful businessmen among its membership.

Really, it should be a doddle. She’d made it quite clear to her booker what a singing telegram did — and did not — entail. And Roderick Carstairs and his mates couldn’t possibly be as tough an audience to crack as the twenty-two five-year-olds tripping on a sugar rush she’d sung Happy Birthday to last week.

Or so she’d hoped.

But as Issy eased the heavy oak panelled door to the East Wing Common Room open and heard the barrage of male hoots and guffaws coming from inside, that hope died a quick and painful death.

From the sound of it, her audience were primed and ready for her — and not nearly as old and fossilised as she’d assumed. The corset squeezed her ribcage as she stayed rooted in the doorway, shielded from view.

Putting on ‘a decent show’ didn’t seem such a doddle anymore.

She stared blankly at the rows of bookcases lining the wall, mustering the courage to walk into the lion’s den, when she caught a movement on the balcony opposite. Silhouetted by the dusky evening light, a tall figure strode into view talking into his mobile phone. It was impossible to make out his features, but deja vu had the hair on the back of Issy’s neck standing to attention. Momentarily transfixed by the stranger’s broad-shouldered build and the forceful, predatory way he moved in the small space, Issy shivered, thinking of a tiger prowling a cage.

She jumped at the disembodied chorus of rowdy masculine cheers and dragged her gaze away.

She straightened her spine and took a step forward, but then her eyes darted to the balcony again. The stranger had stopped moving. Was he watching her?

She thought of the tiger again. And then memory blindsided her.

‘Gio,’ she whispered, as her breath clogged in her lungs and the corset constricted like a vice around her torso.

She gasped in a breath as heat seared up the back of her neck and made her scalp burn.

She pulled her gaze away, mortified that the mere thought of Giovanni Hamilton still made all her erogenous zones do the happy dance and her heart squeeze painfully in her chest.

That guy could not be Gio. She couldn’t possibly be that unlucky. To come face to face with the biggest disaster of her life when she was about to waltz into another. Clearly stress was making her hallucinate.

Issy pushed her shoulders back and took as deep a breath as the corset’s stays would allow.

Striding into the main body of the room, she launched into the sultry opening bars of Liza Minnelli’s signature song. Only to come to a stumbling halt, her stomach lurching back into Big Ben mode, as she rounded the door and got an eyeful of Rodders and his mates. The mob of young, debauched and completely pie-eyed Hooray Henries lunged to their feet, jeers and wolf whistles echoing off the antique furnishings as the room erupted.

Issy’s throat constricted in horror as she imagined Little Red Riding Hood being fed to a pack of sex-starved, booze-sodden wolves — while singing a show tune in her underwear.

Go ahead and shoot me now fellas.

Surf, Sea and a Sexy Stranger
Scroll to top