Too Close for Comfort

Up close, and way too personal!

Breaking and entering is hardly her style, but Iona MacCabe needs her passport back from her ex’s motel room.

Jaded L.A. private investigator Zane Montoya is staking out a con man’s motel room when this pretty Scottish girl gets seriously in the way. For her own safety, he’ll keep her under his very close protection….

Except independent, willful Iona is not best pleased to be “rescued”-even by someone as sexy as blue-eyed, gorgeous Zane! And when he discovers just how innocent she really is, suddenly their scorching attraction feels even more dangerous….

Three hot nights in America’s Golden State lead to … More hot nights! But can they also lead to love?

#3: Too Close for Comfort

A series of books linked by brothers and sisters, friends and lovers… 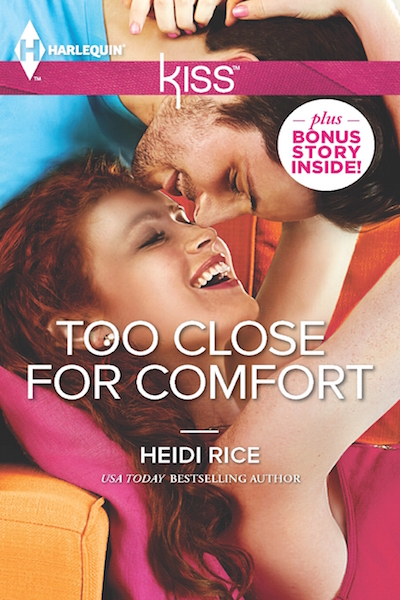 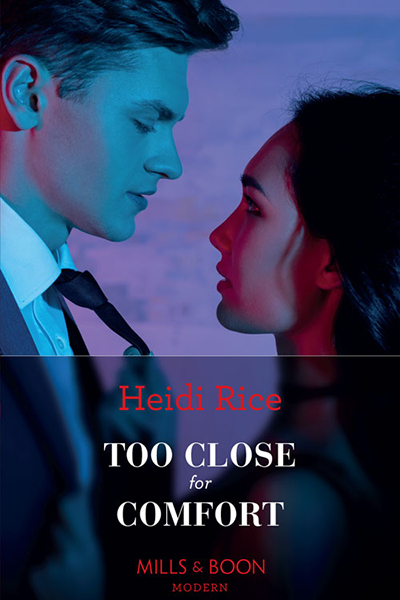 Iona MacCabe eased the door open, and clutched a sweaty palm around the skeleton key she’d spent a week doing the job from hell to get hold of. The tiny strip of light coming through the curtains was alive with dust motes, but didn’t give her much of an idea of the room’s contents bar the two queen-sized beds.

Her heart pounded into her throat at the footstep behind her, but as she whipped round to slam the door, a tall figure blocked the doorway.

Her stomach hit her tonsils as the apparition shot out a hand and wedged the door open.

‘I don’t think so,’ came the gruff voice – tight with anger.

The knee-watering shaft of relief was quickly quashed as an arm banded round her waist. Her back hit a chest like a brick wall, knocking the wind out of her, as he lifted her off her feet.

‘Let go,’ she squeaked, her reflexes engaging as the shadow man hefted her backwards.

‘What the hell do you think you’re doing?’ she yelped as he kicked the motel door shut and carted her across the parking lot to who knew where.

The muscular arm tightened under her breasts and her lungs seized as she figured out that getting abducted might actually be worse than being caught by Brad — the thieving love rat.

‘I’m stopping a felony in progress,’ the disembodied voice growled. ‘Now shut up, because this’ll go a lot worse for you if someone spots us.’

She grabbed his arm and tried to prise it lose, but he was holding her too tightly for her to get any leverage. The tensile strength under her fingertips made the panic kick up a notch. She heard the heavy clunk of a car door opening and began to struggle in earnest. He was kidnapping her.

She’d come five thousand miles, lived on her wits for a fortnight, been cleaning toilets for a week in the grottiest motel in the world, and hadn’t had a decent meal since the day before yesterday, only to get murdered by a nutjob in a motel car park a few feet from her goal.

Fury overtook the panic. ‘If you don’t put me down this instant I’ll yell my bloody head off,’ she whispered, then wondered why she was whispering — and why she was giving him a warning.

She drew in a breath and a callused palm slapped over her mouth. The ear-splitting scream choked off into an ineffectual grunt.

She kicked furiously, but only connected with air, as the scent of something clean and intensely male cut through the aroma of rotting garbage that hung in the night air.
He doesn’t smell like a low-life.

The thought disconcerted her long enough for him to twist round and dump her into the passenger seat of the car.

With his hand no longer cutting off her air supply, she hitched in a shaky breath — only to have the palm cover her mouth again. His forearm held her immobile.
She tried to bite him, but her jaws were wedged shut. His dark head loomed over her, the features still disguised by the shadows — and her heart battered her ribs with the force of a sledgehammer.

The enticing scent enveloped her as he hissed next to her ear. ‘You let out a single sound and I’m going to arrest you on the spot.’

Her mind grabbed hold of the word.

But while her heart stopped pummeling, the panic still crawled across her skin and made sweat trickle between her breasts.

Not being murdered thousands of miles from home was good. But getting caught by a cop breaking into Brad’s room was definitely bad. The temporary work visa she’d spent two months getting hold of would be revoked. She could get deported and then she’d have no chance of getting even a fraction of the twenty-five thousand pounds of her Dad’s money Brad had absconded with.

‘Nod if you understand me?’ he hissed again, low and apparently seriously pissed off.

She nodded, her fingers curling around the key she’d used to get into Brad’s room. She slid the key under her bottom.

He lifted his hand and she sucked in a deep breath.

‘Why didn’t you identify yourself as a cop sooner?’ She declared in a furious whisper, deciding attack was the best form of defence — and a good way to distract him until she could get away from him. ‘You scared ten years off my life.’

‘I’m not a cop, I’m a private investigator.’ He tugged something out of his back pocket and flipped it open. She guessed the card he was showing her was some form of ID, not that she could see it any better than she could see him in the darkness. ‘Now put your belt on, we’re leaving.’

Outrage welled up her throat as he shut the car door, skirted the hood, climbed into the driver’s seat and turned on the ignition.

He’s not even a proper cop?

She grasped the dash as the car reversed out of its slot. ‘Hang on a minute, where are you taking me?’ Maybe she’d been a bit hasty assuming he wasn’t a kidnapper.

‘No I will not,’ she announced as he drove down the block of doorways and braked in front of the motel office. ‘I have a room and a job here. I’m not going anywhere. And if you’re only a fake cop you can’t make me.’

She reached for the door handle, intending to dive out. But he leaned across her, the roped muscle of his arm skimming her breast and clamped his hand over hers on the door handle.

‘You’re not staying here anymore.’ The menacing growl was so full of suppressed anger she flinched. ‘And I can make you. Just try me.’

She tried to flex her fingers, the iron-hard grip merely tightened.

‘Let go now,’ he murmured, his minty breath feathering her earlobe and making her nape tingle. ‘Or so help me, I’m calling this in and to hell with the investigation.’

‘I can’t,’ she hissed back, her anger not quite as controlled as his. ‘You’re holding on too tightly.’

He released her hand and she let go of the handle, shaking her numb fingers in a bid to restore the blood supply before she got gangrene. ‘That hurt. I think you may have crushed a finger.’

The huff of breath suggested he didn’t care if he had.

A large, square open palm appeared under her nose. ‘Now hand over the key.’

‘What key?’ she squeaked, struggling to sound innocent while the key burned into her left bum cheek.

‘The key that’s under your butt.’ He snapped his fingers, making her jump despite her best efforts to remain aloof. ‘You’ve got ten seconds or I’m going to get it myself.’

And then he started to count. Her nipples thrust into hard peaks at the memory of his forearm wedged under her breasts.

She retrieved the key and slapped it into his palm conceding defeat at the unpleasant thought of those long, strong fingers delving under her bottom.

‘There, fine, are you satisfied,’ she sneered, disgusted with herself as well as him. ‘I had to scrub fifty toilets to get that. And believe me, the toilets in this dump need more than there fair share of elbow grease.’

‘Bummer.’ The scoffing sound sent another inappropriate prickle of reaction shooting up her spine.

What the heck was wrong with her? This guy was the opposite of sexy. Clearly a fortnight spent living on a shoestring budget doing dead end jobs in an alien, unfriendly country had melted her braincells.

‘Don’t go anywhere,’ he said, getting out of the car. ‘You won’t like me if I have to come get you.’

She folded her arms across her chest, tense with indignation. ‘I don’t like you now.’

He gave a humourless chuckle.

Iona glared at his back as he walked into the motel office and indulged in a brief fantasy of running off into the night. But as his tall frame stepped into the office — and the lean athletic build rippling under a tan polo shirt and dark trousers became apparent under the harsh strip lighting she let the fantasy go.

After a ten-minute conversation with Greg, the night clerk, he strolled back towards her, silhouetted by moonlight again. As he approached, she became painfully aware of the mile-wide shoulders, narrow hips, long legs and the predatory stride.

Whoever this guy was, he was a lot stronger and bigger than she was — and she already knew he didn’t mind using his physical advantage. Which meant she was going to have to wait to make a clean getaway.

He paused next to the car and pulled out a smart phone. As he talked into the device, the blue light from the neon Vacancy sign hit his face.

Iona gasped. Her abductor could make a living as a male super model.

A bubble of hysteria built under her breastbone as she stared at the firm sensual lips, the aqualine nose with a slight bump at the bridge, the sculpted angular cheekbones, the olive-toned skin and the shadow of stubble on his jaw. He glanced towards her and her lungs stopped, as she absorbed the deep, sapphire blue of his eyes and the unusual dark blue rim around the irises. Was that a trick of the light? Even Daniel Craig’s eyes weren’t that blue. Surely?

He finished the call — not a word of which she’d managed to catch due to the loud buzzing in her ears from a lack of oxygen — and slipped the smart phone back into his pocket.

He settled into the driver’s seat, thankfully casting his stunning face into darkness again.

She looked away and concentrated on breathing. So what if he was better looking than Adonis? He was still a bullying jerk.

One Night, So Pregnant!

Maid of Dishonor
Scroll to top