Is she or isn’t she?

Princess Juno won’t stand by and let her twin sister be forced into a loveless marriage with King Leonardo of Severene. Juno switches places with her for Christmas, intent on ruining the match. Yet a night of electrifying pleasure with the playboy king wasn’t part of the plan!

Leo has never felt such searing attraction, least of all for his duty-bound fiancée. It’s clear why, when her true identity is revealed! But Juno’s princess swap is going to have shocking consequences when they realize they need a royal pregnancy test…! 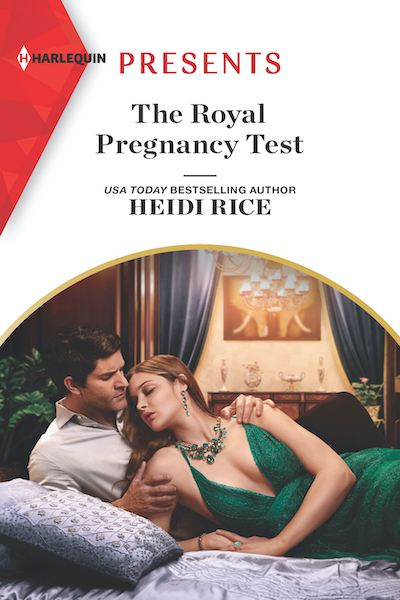 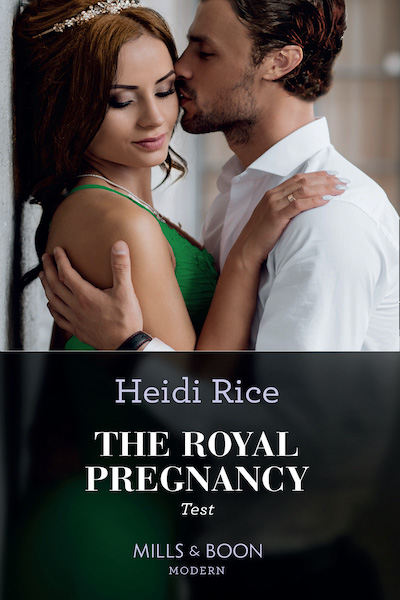 King Leonardo DeLessi Severo of the Kingdom of Severene was so bored he was on the verge of lapsing into a coma.

Attending official events such as the Monrova Winter Ball were all part of the job description when you were the ruler of a wealthy European country. That and giving pointless speeches, making dull, dignified small talk, wearing uncomfortable uniforms decorated with too much brocade, and hefting around polished ceremonial swords, which you’d been taught how to wield with rapier-sharp accuracy as a boy but had never had a chance to use.

Queen Jade’s financial secretary droned on about the remarkable yield from last year’s rapeseed harvest as Leo imagined whipping out the golden sabre banging against his hip and slicing off the feather in the man’s tricorn hat.

He stifled an impatient sigh.

Where was the Queen?

The woman was close to an hour late for her own Winter Ball.

He liked and respected Monrova’s new monarch. When he’d outlined the benefits of a marriage between them, she had seemed intelligent and engaged, if reserved. She would make him a very suitable wife and joint head of state. Her status and lineage, not to mention her country’s abundant mineral reserves, and their similar dedication to civic duty would make theirs the perfect power partnership in the region—plus eventually provide both their countries with an heir. And she was quite beautiful, objectively speaking. There hadn’t been much of a spark between them—and he had an unfortunate suspicion she might be a virgin. Her father had often talked proudly of his daughter’s ‘respectability’ before he died, which Leo had assumed was a euphemism for not allowing her to date—and since she had assumed the throne there had been no whiff of any romantic entanglements… Except with him—which he knew to be fiction.

Even if he was hoping to make the rumours a reality.

He would have preferred she not be completely chaste, but he had never had a problem satisfying a beautiful woman, so he didn’t see her chronic lack of experience causing too much of a problem once they were wed.

Her tardiness, though, was another matter.

He’d had to exchange more than his fair share of tedious conversation with faceless bureaucrats. And he was starving. His stomach grumbled on cue, the rumble detectable under the tinkle of champagne flutes and the strains of a chamber orchestra in the far corner of the palace antechamber where they were all waiting for the Queen’s late arrival.

He ignored the flushed reaction of the financial secretary to his increasingly demonstrative hunger pains. What did the man expect? He hadn’t had a chance to eat since breakfast due to his full schedule of talks with Monrova’s trade ministers.

Talks the Queen had chosen not to attend because her advisors had said she needed time to ‘prepare’ for the ball.

If she agreed to become his bride, he would have to make it very clear that delays of this nature would not be tolerated.

A wailing bugle interrupted his internal diatribe, and a royal courtier appeared on the balcony above the antechamber.

A hush descended over the crowd as Queen Jade appeared.

But as she descended the wide sweeping staircase the strangest thing happened. His breathing became a little ragged.

He’d considered her beautiful the last time he’d met her a month or so ago. But he had never noticed how lush her figure was before now. The sensual curves filled out the floor-length silver satin ball gown she wore to perfection, drawing his eye to the gown’s bodice embroidered in gemstones and her generous cleavage.

He dragged his gaze away as his breathing became laboured. Surprised by his reaction.

Her thick chestnut hair had been arranged in an elaborate up do crowned by a diamond tiara. The headdress’s gems glittered in the chandelier light and created a halo that highlighted high cheekbones and the sultry shape of her eyes.

His breath became trapped in his lungs as the satin shimmered, moving sinuously over her voluptuous figure.

Whatever the hell she’d been doing for the last four hours, it had been worth it.

She looked every inch the Queen, but there was something earthy and elemental and much more approachable about her too, which he hadn’t sensed a month ago. Which was even more surprising. He was usually an exceptionally observant man when it came to women. Especially women he intended to marry.

The spark he’d been convinced didn’t exist began to sizzle.

The crowd parted and her gaze—bold and direct, and nowhere near as demure as he remembered it—locked on his. Instead of greeting the other, less senior guests first—which was the protocol—she walked past them and headed through the crowd straight towards him.

The sizzle became hot and fluid, sinking deep into his abdomen. The buzz of anticipation in his blood almost as loud as the buzz of conversation building around the room.

Was he actually getting turned on?

Her gaze roamed over him, both daring and amused, and he suddenly had the feeling she was assessing him like one of his own prize stallions. Why had he never noticed that mischievous sparkle before either? It turned the refined jade of her irises to a vibrant emerald.

‘Good evening, Leo,’ she said, her voice a smoky purr.

The spike of adrenaline was as unsettling as the prickle of surprise.

Every other encounter he’d had with the Queen, she had been exceptionally well versed in etiquette and protocol. She had never even called him by his given name and no one used that nickname…

The shocking memory of bright emerald eyes naked with longing, a voice full of childish demand and adult yearning, and soft fingertips trailing across his nape and detonating in his groin, sent a shaft of déjà vu through his system so uncomfortable he stiffened. The prickle of shame not far behind it.

Not the same girl, damn it.

That had been Jade’s twin sister. Princess Juno. King Andreas’s younger daughter, the disobedient teenager who had developed a ludicrous crush on him eight summers ago. Ludicrous, that was, until she’d tried to kiss him and—for one split second—he’d been tempted.

He’d been twenty-two and she’d been sixteen. A child and a really annoying one at that. Until that moment in the moonlight, when his libido had played tricks on him—and what he’d seen was the woman, instead of the girl.

He shook off the unsettling memory. The lack of sustenance was obviously messing with his head.

This was the Queen of Monrova. The woman he planned to marry. Not her extremely annoying—and utterly undisciplined—twin. Thank God.

A whisper rolled through the crowd. No doubt the use of the nickname was going to be all over the media tomorrow.

‘I hope you haven’t been waiting too long,’ she added, even though the mocking tone suggested she didn’t care in the slightest.

Her breasts rose and fell, the plump flesh straining against the low-cut gown. But then a flush spread deliciously across her collarbone.

Something hot and volatile stirred, to go with the sizzle that hadn’t died. And the forced smile on his lips became genuine. She felt it too, the electric chemistry that had hit him like a lightning bolt.

He gave her a mocking bow and let his gaze rake over her in return.

Whatever game she was playing, he had the urge to play it too.

‘Your Majesty, believe me, you were more than worth the exceptionally long wait.’ He grasped her fingers and pressed his lips to her knuckles. She shivered—and the sizzle became a spark.

‘Of course,’ she replied, although she sounded less sure.

He folded her arm under his, tugging her against his side to lead her into the banqueting hall.

Even in her heeled slippers, her head barely reached his collarbone, which made her shorter than the women he usually dated. At six foot four, and with a muscular physique, he generally preferred women who didn’t make him feel like a giant. But while the size disparity had concerned him before, now he found it a turn-on too.

Perhaps her previously undetected boldness didn’t have to be a bad thing?

They entered the large banqueting hall and he tensed.

Fresh holly wreaths elaborately finished with gold ribbons had been hung from the cornicing, while candles burned in the wall sconces to mark the upcoming festive season.

Christmas was his least favourite time of year.

She glanced at him. ‘Is something wrong?’

‘Not a thing,’ he said, surprised she had noticed the slight hesitation. And not sure he liked it.

But when she disengaged her arm as soon as they reached their seats at the top table, he stifled a smile.

Not quite so bold now?

Waving off the waiting footman, he pulled her banqueting throne out.

As she deposited her bottom onto the velvet cushion, an unfamiliar scent teased his nostrils—citrus and musk—which was fresher and more intoxicating than the vanilla perfume he had detected before. His gaze fixed on the spot behind her ear.

Was that where she wore her scent? What would she taste like if he kissed her there? How would she react? Would she writhe? Would she moan?

Before he could think better of it, he whispered in her ear. ‘Fair warning, Your Majesty. After my exceptionally long wait, I’m starving.’

She glanced round, her gaze filled with a compelling mix of surprise and awareness. The flush on her cheeks had his mind fogging with lust and his gaze snagged on her mouth. A vision of biting into that plump bottom lip and soothing it with his tongue tortured him.

He drew back, disturbed by the intensity of his reaction.

When was the last time he had wanted a woman so badly he had acted on instinct? His manners were usually impeccable.

Stop staring at her mouth.

‘If you insist, Your Majesty,’ he replied. ‘Although I consider it my sworn duty to change your mind.’

Her eyes widened—and she frowned. ‘Good luck with that, Leo.’

He let out a rough chuckle as the last of his restraint headed straight out of the banqueting hall’s large mullioned windows and into the December night.

A Forbidden Night with the Housekeeper