So Now You’re Back

Halle took her passion for baking and built her media empire alone after her ex Luke walked out on her sixteen years ago, leaving her a teenage single mum to their two year old daughter Lizzie in a dingy flat in Hackney.

Now a bona fide celebrity success, she only speaks to Luke via her lawyer. But as he is about to write a tell-all book exposing some of Halle’s deepest secrets, keeping him at arm’s length won’t be so easy anymore.

When Luke suggests a getaway to work through their past, Halle thinks he’s crazy; if they can survive two weeks together it will be a miracle.

Yet reconnecting with her past, could be the only way to start her future. 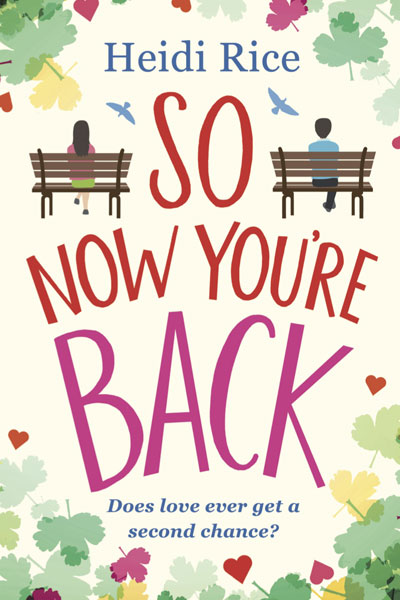 Halle passed a fistful of notes through the grille, pleased when her fingers barely trembled, and waved off the change before stepping out of the cab. She shielded her eyes against the watery sunlight and absorbed the majesty of the palatial garden square that had emerged like an oasis from the rabbit warren of narrow cobblestoned streets they’d bulleted through to get here from the Gare du Nord. As the cab drove away, her gaze landed on the Café Hugo across the road, and the line of tables nestled under the arches of the grand sixteenth-century facade.

She scanned the bunches of customers huddled at the tables away from the spitting rain, but saw no sign of the man she had come to meet. She let out a sharp sigh, as it occurred to her she might not even recognise him after sixteen years. After all, she never would have expected him to choose somewhere so highbrow and sophisticated for this meeting. The Luke she’d known had been much more at home at the greasy spoon round the corner from their flat—or the local pub—than an elegant pavement café in Paris.

She dismissed the observation. Obviously, she had never known that Luke either, or he wouldn’t have managed to sneak the fact past her that he didn’t give a shit about her, and she certainly had no intention of getting to know the new Luke now. Once this short sharp shock was over with, she would never have to set eyes on him again. So what did it matter if Luke had become a sophisticated man of the world who could tell the difference between a pint of Stella and a glass of Pouilly-Fuissé?

She crossed the street, skirted the outdoor tables and headed towards the glass doors at the café’s entrance, employing the breathing technique she used while they were taping the show, seconds before the green camera light clicked on. The only thing she hoped about the new Luke was that he’d improved his timekeeping—because if he was as fashionably late as he’d once been, the volcano in her stomach was liable to blow.

She entered the darkened café interior, to be greeted by the comforting scent of roasting coffee, sautéed garlic and fresh baking. High-backed leather booths and stained glass panels coupled with the low lighting from the hand-blown chandeliers made the bustling inside of the restaurant seem more intimate but no less elegant than the outside.

Her stomach did another uncomfortable flip-flop.

Terrific, intimacy, just the ambience I want for this meeting.

The maître d’ stood by a lectern talking to a tall man wearing a long dark blue mac with his back to her.

The spike of recognition at the man’s hip-shot pose sprinted up her spine just before he looked round and a pair of painfully familiar sky-blue eyes located her standing behind him like a muppet.

‘Luke!’ The name popped out on a shocked whisper.

How can he have gotten better looking? The sneaky bastard.

She studied the high angles of his cheekbones, the heavy-lidded eyes, which always looked as if he’d just climbed out of bed, the flat place on the bridge of his nose where he’d broken it in a fight and the deadly dimple in his chin which had made her the envy of every girl in class 10C when they’d started dating. Then did a quick survey of long legs encased in black jeans, and the navy-blue cotton polo neck hugging a chest that looked much broader than she remembered it too.

Why didn’t you give in to your curiosity yesterday and Google him?

If only she had, she would have been much better prepared for her first eyeful of this new, annoyingly even more buff Luke.

‘Haley,’ he said, murmuring the name she’d had as a girl. The name that had always felt boring and unoriginal until she’d heard him say it. The name she’d changed a year after he’d left.

‘It’s Halle, I don’t answer to that name any more.’

Any more than I intend to answer to you, she thought defiantly, even if hearing that name again on his lips had given her an uncomfortable jolt.

‘You mind if I call you Hal?’ he replied, the once familiar nickname giving her another unpleasant jolt. ‘Halle sounds kind of intimidating,’ he said, as his gaze drifted up to her hair with a leisurely sense of entitlement.

If that’s your intimidated look, I’m not buying it.

She bit down on her frustration.

‘Call me whatever you like,’ she countered with deliberate nonchalance, knowing when she was being played. If he thought he could get a rise out of her that easily, he’d miscalculated.

‘Hal it is then. I’m glad we got that settled.’ He swept his hair off his brow. She stared resentfully at the thick, casually styled waves of tawny sun-streaked bronze, long enough now to touch the collar of his mac.

Couldn’t he have lost some of that hair? Surely male-pattern baldness is the least he deserves after the shoddy way he treated me?

He planted one hand in his back pocket, as she frowned at his non-receding hairline, and cocked his head to one side. The infuriatingly leisurely gaze dropped down to her kitten heels.

All the muscles in her face and jaw had clenched—in direct counterpoint to his relaxed body language—by the time his eyes finally met hers again.

‘You haven’t changed.’ The rusty tone, rich with appreciation, shimmered over the skin of her nape, and made tension scream across her collarbone.

Back off, buster, that’s one familiarity too far.

She adjusted the strap of her briefcase to loosen her shoulder blades before she dislocated something.

‘If that’s supposed to be flattering, it’s not.’ She laid on as much snark as she could manage while struggling to draw an even breath. ‘This happens to be new season Carolina Herrera not a supermarket own brand.’

His wide lips curved on one side, the half-smile equal parts confidence and rueful amusement—suggesting her attempt at a slap-down had missed its target by a few thousand miles. But then again, she hadn’t expected a direct hit so soon. Luke’s ego had always been robust. Given how good he looked, she’d hazard a guess it was virtually indestructible now.

‘I don’t have a fucking clue who Carolina Herrera is,’ he said, the casual use of the f-word a prosaic reminder of how she’d once found his genial swearing so sexy.

God, what a clueless muppet I once was.

‘But whoever she is,’ he added, ‘she looks great on you.’

He took a step forward, coming perilously close to her personal space and forcing her to tilt her head back to meet his gaze.

I do not believe it. Has he actually gotten taller, too?

While he was definitely more muscular than he’d been at twenty-one, how could he have also gained an extra inch in height? At five foot four, she had always felt petite standing next to him, but she certainly didn’t remember having to look this far up to see his face.

Sod the kitten heels. I should have worn stilts. It’s going to be next to impossible to kick-ass as a midget.

He rattled something off in fluent French to the maître d’, who laughed and then grabbed a couple of menus, before directing them into the restaurant.

‘Jean-François has saved us the best booth,’ Luke said.

‘Fine.’ She refused to worry about what he’d said to put that knowing smile on Jean-François’s lips. She had enough crap to process already. ‘Let’s get this over with,’ she added, pointedly, as she followed the maître d’.

But, as she stepped in front of Luke, his palm touched her lower back and sensation rippled across the upper slope of her bum. She stiffened and jerked round.

He held up the offending hand, then tucked it back into his pocket, but the crinkle of humour around his eyes made his easy surrender a decidedly pyrrhic victory.