I’ve drawn her into my world… And she’s mine to awaken!
Walking into my casino, Edie Spencer seemed like a spoilt heiress—until she agreed to clear her family’s debts by posing as my temporary mistress. My plan? To use her to expose my business rivals. Yet discovering Edie’s innocence has led to greater temptation than I could have imagined. Our chemistry is spectacular—now I’ll claim Edie for so much more than pleasure!

In the capital of glitz and glamour, two lone billionaires discover the power of innocence… And love. 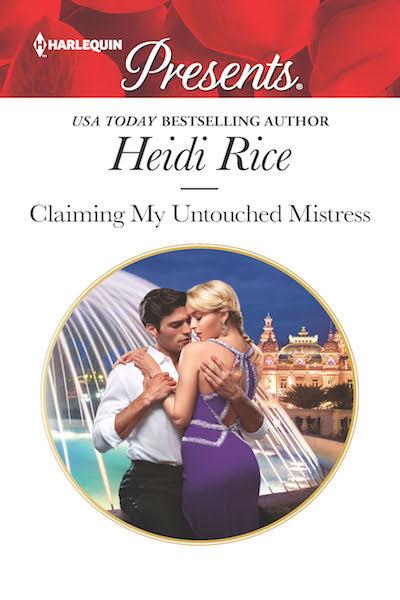 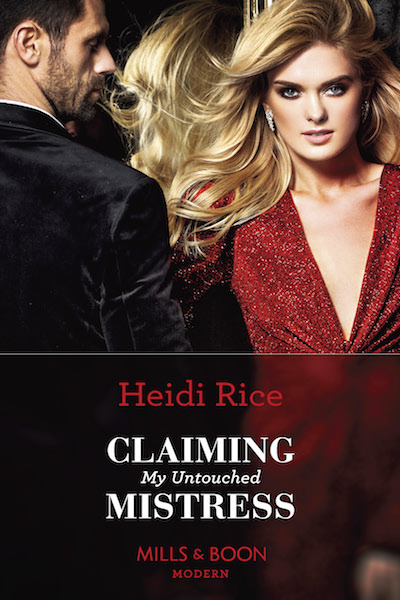 I struggled to control the tidal wave of panic surging through me as I read the sign on Dante Allegri’s Monaco casino.

Welcome to The Inferno

The glitter of lights gave the building’s imposing eighteenth-century façade a fairy-tale glow in the Mediterranean night—making me feel like even more of a fraud in the second-hand designer gown and uncomfortable ice-pick heels my sister and I had sourced online. What I was about to do could make or break my family.

I’d seen photos of Allegri, and read myriad articles about him in the last month as I prepared for this night. He scared me as a competitor but terrified me as a woman.

Allegri was famous for his ruthlessness, having risen from the slums of Naples to create a billion-dollar empire of casinos in Europe and the US. If I had to play against him, and he figured out the system I had developed, he would show me no mercy.

A sea breeze from the marina below the casino lifted the tendrils of hair off my neck which had escaped the elaborate up-do my sister had spent hours constructing from my unruly curls. Shivers racked my body, but I knew it wasn’t the warm summer night that was making me feel so cold inside—it was fear.

Lifting the hem of the gown, I walked up the marble stairs to the main entrance, making an effort to keep my back straight and my gaze forward. The million-dollar bank draft borrowed from my brother-in-law’s loan shark stashed in the jewelled clutch purse on my wrist felt as if it weighed several tons.

‘You want to throw good money after bad, that’s your choice, Ms Trouvé, but I’ll be here tomorrow to collect, whatever happens.’

The words of Brutus Severin, Carsoni’s muscle man, echoed in my head and the chill spread like a frost.

This was my last chance to free us from the threats and intimidation, the possibility of losing not just our family home, but also our dignity and self-respect. Something my sister Jude’s husband Jason had stolen from us twelve months ago—after losing a fortune at Allegri’s roulette tables.

Failure simply was not an option tonight.

I approached the security detail standing guard at the entrance and passed them my ID card. I prayed that Carsoni’s forger had done the job we had paid him for. The guard nodded and passed it back to me. But my panic refused to subside.

What if my system didn’t work? Or had more tells than I had anticipated. I wasn’t sure if I’d had enough time to test it properly—and I had never had the opportunity to test it against players of Allegri’s calibre. How did I know it would stand up to scrutiny? I was a maths prodigy, not a poker player, for goodness’ sake.

If Allegri was here, and decided to play—as he occasionally did, according to my research—and he beat me, not only would Belle Rivière be lost for ever, but I would owe Carsoni an extra million euros I couldn’t repay. Because the sale of the property, now we’d already mortgaged it and sold all our other valuables and most of the furniture, would only cover the balance of Jason’s losses and the astronomical interest Carsoni had been charging us since the night Jason had disappeared.

The door guard signaled to a tall, good-looking man standing at the entrance to the main floor. He joined us.

‘Welcome to The Inferno, Miss Spencer,’ the man said. ‘I’m Joseph Donnelly, the casino manager. We have you listed as one of tonight’s club buy-ins.’ He sent me a quizzical look, obviously not used to having someone of my age and gender join the casino’s exclusive weekly poker tournament. ‘Is that correct?’

I nodded, trying to channel my inner elite, entitled heiress—something I had never been, even though my mother had been the granddaughter of a French count.

‘I’ve heard The Inferno’s game is one of the most challenging,’ I said. ‘I was hoping Allegri would be here tonight,’ I lied smoothly—playing the pampered rich girl to the hilt. If life with my mother had taught me one thing, before she died, it was how to appear confident when I felt the opposite.

‘Appearances are everything, ma petite chou. If they think you are one of them, you cannot fail.’

The casino manager sent me an easy smile, and I waited for the words I hoped to hear—that my research had paid off and Dante was in Nice this evening, wining and dining the model he had been linked with for several weeks in the celebrity press.

‘Dante’s here tonight; I’m sure he’d relish the challenge.’ Donnelly’s words didn’t register at first, and then they slammed into me.

I pasted a smile on my face, the same smile I had worn at my mother’s funeral to receive the condolences of journalists who had hounded her throughout her life, while coping with the body blow of fresh grief.

My movements were stiff, though, as Donnelly led me to the teller’s booth to deposit the stake I had borrowed at two thousand per cent interest. The stake I couldn’t afford to lose.

I ran all the possibilities over in my mind. Could I back out now? Make up some fictitious excuse? Pretend I was sick? Because that wasn’t a lie—my stomach was churning like a storm at sea.

Allegri was one of the best poker players in the world. Not only could I lose all the money but if he figured out my system he could have me banned from every reputable casino. So I’d have no chance of ever recovering Jason’s losses.

Even as my frantic mind tried to grasp and dissect all the possibilities, though, I knew I couldn’t back out. I’d taken a chance Allegri wouldn’t be here and I’d lost. But I had to go through with tonight’s game.

Before I had a chance to handle the visceral fear at the thought of facing Allegri with so much at stake, a deep voice reverberated down my spine.

‘Joe, Matteo tells me all the players have arrived.’

I swung round and came face to face with the man who had haunted my dreams—and most of my waking hours—for months, ever since I’d begun working on this scheme to free our family from debt. To my shock, Allegri was even taller, broader and more devastatingly handsome in the flesh than he had been in the numerous celebrity blogs and magazines I’d been monitoring.

I knew he was only thirty, but the harsh angles of his face, and the unyielding strength of muscle and sinew barely contained by the expensive tuxedo, made it clear that the softness and inexperience of youth—if he had ever been young or soft—had left him long ago. Everything about him exuded power and confidence, and a frightening arrogance. No, not arrogance. Arrogance implied a sense of entitlement beyond one’s abilities. This man was fully aware of his abilities, and was ready to use them with complete ruthlessness.

His vivid blue gaze flickered over my face—and one dark eyebrow raised a fraction of a centimetre. The tiny tell vanished as soon as it had appeared. His intense gaze took a quick tour down my body. The provocative dress became instantly transparent while at the same time squeezing the air out of my lungs, as if the thin satin had turned to cast iron and was tightening around my ribs like a piece of medieval torture equipment.

Unlike the looks I had experienced from Carsoni and his men over the last year, though, Dante Allegri’s perusal didn’t cause revulsion but something much more disturbing. A heavy weight sunk low into my abdomen and sensation prickled over my skin as if I were being stroked by an electric current. His attention was exhilarating and enervating, pleasurable and painful all at the same time. My reaction shocked me, because I couldn’t seem to control it. My thighs trembled, my breasts swelled against the bodice of my medieval torture equipment, and it took an effort of titanic proportions to stop my breathing from speeding up.

‘That’s correct, Dante,’ Joseph Donnelly replied to his boss. ‘This is Edie Spencer,’ he added, wrenching me out of the trance Allegri’s presence had caused. ‘She’s just arrived and is hoping to play you tonight.’

I winced at the amusement in Donnelly’s tone, my panic increasing to go with the inexplicable aches all over my body. As if it wasn’t bad enough that I had tossed myself into the lion’s den tonight, I had decided to poke the lion with that foolish boast.

Allegri didn’t look particularly impressed as his intense gaze roamed over my face.

‘Exactly how old are you, Miss Spencer?’ he asked, addressing me directly for the first time. His English was perfect, the accent a mid-Atlantic hybrid of American and British with barely a hint of his native Italian. ‘Are you even legally allowed to be here?’ he added, and I bristled at the condescension. It was a long time since I’d felt like a child, let alone been treated like one.

‘Of course—I’m twenty-one,’ I said in a show of defiance that probably wasn’t wise, but something about the way he was looking at me—as if he actually saw me—and the disturbing conflagration of sensation that look was setting off all over my body made me bold.

He continued to stare at me, as if he were trying to see into my soul, and I forced myself not to break eye contact.

The noise from the main floor of the casino, as Europe’s billionaire elite tried their luck at roulette and vingt-et-un, faded to a distant hum under his intense scrutiny—until all I could hear was the thunder of my own heartbeat thumping my ribs.

From Antigua with Love
Scroll to top