Hired by the sheikh… And expecting the royal heir!

Now carrying the heir to the kingdom means one thing—Cat must become Zane’s queen!

Powerful sheikhs and the women who can tame them!

#2: Claimed for the Desert Prince’s Heir – Prince Kasim and Kasia 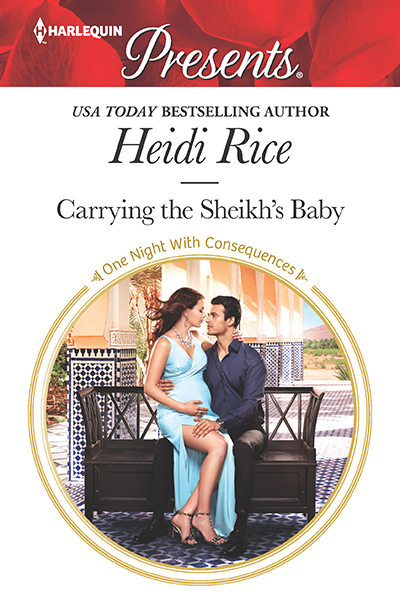 Buy in the US 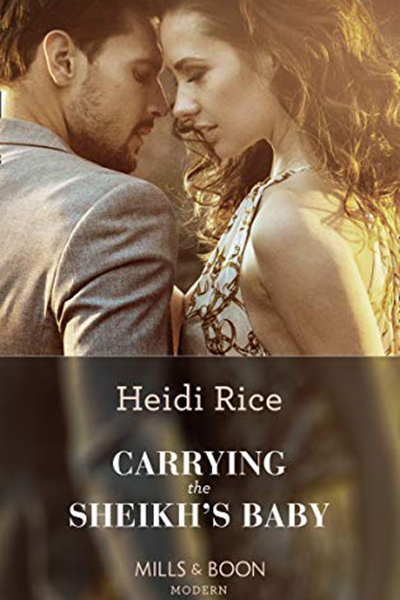 Buy in the UK

Dr Smith, you need to come to my office ASAP. You have a very important visitor who cannot be kept waiting.

Catherine Smith pedalled through the gates of Cambridge’s Devereaux College at breakneck speed, her boss Professor Archibald Walmsley’s curt text making sweat trickle down her forehead and into her eyes.

Braking at the side of the redbrick Victorian monolith that housed the faculty offices, she leapt off the bike and rammed it into the cycle rack, before swiping her brow. Rounding the building, she spotted a limousine with blacked-out windows and diplomatic flags parked in the no-parking zone by the front entrance. Her heartbeat kicked up several extra notches.

She recognised those flags.

So that solved the mystery of who had come to visit her: it had to be someone from the Narabian embassy in London. Panic and excitement tightened around her ribs like boa constrictors as she raced up the steps—her mind racing ahead of her.

A visit from the Narabian embassy could either be very good, or very bad.

Walmsley—who had taken over as Devereaux College’s dean after her father’s death—was going to kill her for going over his head and applying for official accreditation for her research into the recent history of the secretive, oil-rich desert state. But if she got it, even he wouldn’t be able to stand in her way. She’d finally be able to get more funding for her research. Her heart thudded against her chest wall in a one-two punch. She might even get permission to travel to the country.

Surely this had to be good news. The country’s ruler, Tariq Ali Nawari Khan, had died two months ago after a long illness and his son, Zane Ali Nawari Khan, had taken over the throne. A darling of the gossip columns as a baby—Zane Khan was half American, the product of Tariq’s short-lived marriage to tragic Hollywood starlet Zelda Mayhew—he’d disappeared from the public eye, especially after his father had won custody of him in his teens. But there had been several credible stories the new Sheikh was planning to open the country up, and bring Narabia onto the world stage.

Which was why she’d made her application—because she was hoping the new regime would consider lifting the veil of secrecy. But what if she’d made a major mistake? What if this visit was actually very bad news? What if the diplomat was here to complain about her application? Walmsley could use it as an excuse to end her tenure.

She rushed down the corridor towards Walmsley’s office, breathing in the comforting scent of lemon polish and old wood.

The pulse of grief hit her hard as she took the stairs to her father’s old office. This place had been her whole life ever since she was a little girl, and her father had taken over as the new dean. But Henry Smith had been dead for two years now. And Walmsley had wanted her gone—as a reminder of the man whose shadow he’d lived in for fifteen years—for almost that long.

Buck up, Cat, it’s time. You can’t spend the rest of your life hidden behind these four walls.

Turning the corner to Walmsley’s office, she spotted two large men dressed in dark suits standing guard outside his door. Her heart rammed into her throat, the crows of doubt swooping into her stomach like dive bombers.

Why had the Narabian embassy sent a security detail? Wasn’t it a little over the top? Maybe Walmsley’s reaction wasn’t the only thing she had to worry about?

She brushed her hair back from her face and retied the wayward curls to buy time. The snap of the elastic band was like a gunshot in the quiet hallway. Both men stared at her as if she were a felon, instead of a twenty-four-year-old female professor with a double PhD in Middle Eastern studies. They looked ready to tackle her to the ground if she so much as sneezed.

She forced herself to breathe. In, out—that’s the spirit.

‘Excuse me,’ she murmured. ‘My name’s Dr Catherine Smith. Professor Walmsley is expecting me.’

One of the man mountains gave a brusque nod, then leaned round to shove open the door. ‘She is arrived,’ he announced, in heavily accented English.

Cat entered the office, the hairs on her neck prickling alarmingly as Walmsley’s head snapped up.

‘Dr Smith, at last, where have you been?’ Walmsley said, his exasperated enquiry high-pitched and tense.

Cat jumped as the door slammed shut behind her. Her anxiety levels increased, the boa constrictors writhing in her belly. Why was the dean fidgeting like that with the papers on his desk? He looked nervous, and she’d never seen him nervous before.

‘I’m sorry, Professor,’ she said, trying to read her boss’s expression—but his face was cast into shadow by the pale wintry light coming through the sash window behind him. ‘I was in the library. I didn’t get your text until five minutes ago.’

‘We have an esteemed visitor, who is here to see you,’ he said. ‘You really shouldn’t have kept him waiting.’

Walmsley held out his arm and Cat swung round. The prickle of awareness went haywire. A man sat in the leather armchair at the back of Walmsley’s office.

His face was cast into shadow. But even seated he looked intimidatingly large, his shoulders impressively broad in an expertly tailored suit. He had his left leg crossed over his opposite knee, one tanned hand clasping his ankle. The expensive gold watch on his wrist glinted in the sunlight. The pose was indolent and assured and oddly predatory.

He unfolded his legs and leaned out of the shadows, and Cat’s wayward pulse skyrocketed into the stratosphere.

The few photographs she’d seen of Sheikh Zane Ali Nawari Khan didn’t do him justice. High slashing cheekbones, a bladelike nose and his ruthlessly cropped hair were offset by a pair of brutally blue eyes, the colour of his irises the same true turquoise his mother had once been famous for.

He had clearly inherited all the best genes from both sides of his bloodline—his features a stunning combination of his father’s striking Arabic bone structure and his mother’s almost ethereal Caucasian beauty. In truth, his features would almost be too perfect, but for the scar on his chin—and a bump in the bridge of his nose, which marred the perfect symmetry.

‘Hello, Dr Smith,’ he said, in a deep cultured voice, his English still tinged with the lazy cadence of America’s West Coast. He unfolded his long frame from the chair and walked towards her—and she had the weirdest sensation of being stalked, like a gazelle who’d accidentally wandered into the lion enclosure at London Zoo. She struggled to get her breathing back under control before she passed out at his Gucci-clad feet.

‘My name is Zane Khan,’ he said, stopping only a smidgen outside her personal space.

‘I know who you are, Your Highness,’ she said, breathlessly, far too aware of her height disadvantage.

He spoke again in that same clipped, urbane tone. ‘I don’t use the title outside Narabia.’

Blood rushed to her face and flooded past her eardrums. Then a dimple appeared in his left cheek, and her lungs seized again.

‘I’m sorry, Your High… I mean, Zane.’ Heat charged to her hairline, when his lips quirked.

Oh. My. God. Cat. You did not just call the ruler of Narabia by his first name.

She sucked in a fortifying breath and the refreshing scent of citrus soap, overlaid with the spicy hint of a clean cedarwood cologne, filled her nostrils. She shuffled back, and her bottom hit Walmsley’s desk.

He hadn’t moved any closer, but still she could feel that concentrated gaze on every inch of her exposed skin.

‘Are you here about my request for accreditation?’ she asked, feeling impossibly foolish.

Why on earth would he have come all this way, to see her, over something that could be sorted out by one of his minions in the Narabian embassy in London?