10 Ways to Handle the Best Man

The maid of honor’s to-do list for handling the best man:

#1 Charm him.
#2 Find out everything about him from friends and family.
#3 Size definitely matters: especially when it comes to the ego. Tread carefully if he has a big one….

Sabrina Millard has a plan and a list for everything, including her role as maid of honor at her BFF’s wedding. The best man is a whole different matter. She knows Connor McCoy is trouble—she once had a disastrous encounter with him years ago. Now that he’s supersexy and supersuccessful, it’s even worse. Especially as he’s just proved who’s in charge by shattering her legendary control…under the table at the rehearsal dinner!

Connor’s having fun seducing prim Sabrina. Which is so wrong—she’s the ultimate good girl, while his past is…complicated. Only Sabrina has him breaking all his own rules…. 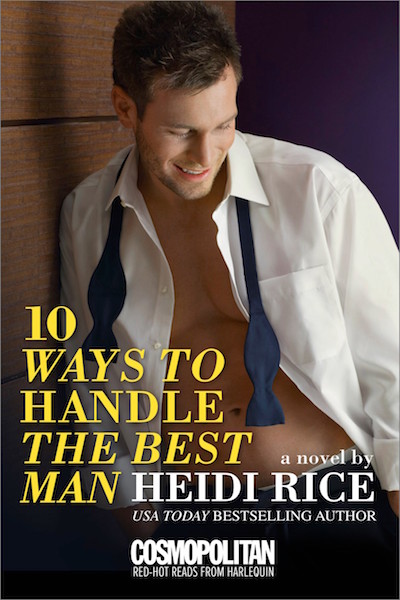 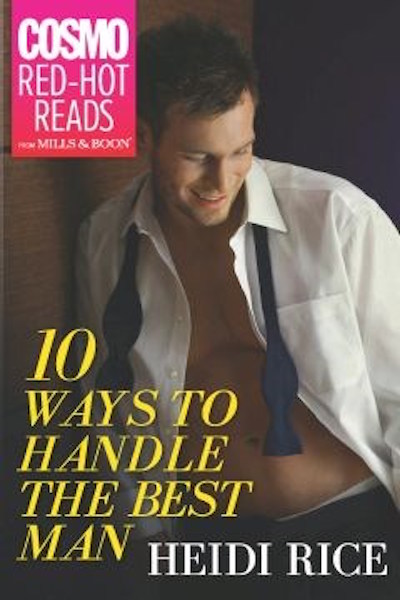 HOW TO BE THE PERFECT MAID OF HONOUR:
TEN TIPS FOR HANDLING THE BEST MAN

1). Schmooze Him, Don’t Lose Him: Start your charm offensive early, and don’t give your Best Man too much wriggle room.

Sabrina Millard resisted the urge to roll her eyeballs at the man sitting opposite her in the crowded Soho pub, while silently cursing her BFF Libby and Libby’s fiancé Jamie.

Wow Libs, thanks so much for saddling me with the Best Man from Hell to handle.

As a Maid of Honour with enough experience to write a book about the pitfalls of the role, Sabrina knew handling the Best Man vied for the top spot in ‘Wedding Crap the Maid of Honour Has to Deal With’ right alongside:

1). Wearing an exceptionally unflattering dress (puffball sleeves optional) — so as not to upstage the bride.

2). Making sure the bride didn’t have a nervous breakdown or develop an eating disorder before her big day.

3). Getting hit on by tipsy groomsmen — who assumed that if you were single and a member of the Bridal Party you’d put up with getting shagged senseless against a wall by any eligible bachelor within a ten mile radius.

Luckily, as the company manager at The Phoenix, a non-profit theatre on London’s South Bank, Sabrina happened to be exceptionally talented at planning events while coping with colossal egos – making her confident she could even whip Jamie’s half-brother Connor McCoy into shape: the Creature from the Testosterone Lagoon.

But even with her excellent man-handling strategies, Sabrina was struggling to suppress a scowl after only fifteen minutes in McCoy’s company. That he kept challenging every single thing she said with that surly, I-couldn’t-give-a-shit look in his pale blue eyes was not helping with her scowl control.

‘Yes, well I’m afraid as the Best Man you’re going to have to dance,’ she said, subtly alerting him to the fact he wasn’t the most knowledgeable person on the subject of wedding etiquette.

If Libby hadn’t already clued her in about the commitment-phobic dating habits of her beloved’s older brother, Sabrina could have guessed from the way his smouldering gaze had checked out every woman in the place in the ten minutes since he’d arrived. Every woman that was, except her.

Not that she cared about his lack of interest per se. All right, so Connor McCoy was undeniably hot, she’d give him that. The combination of cool azure eyes, dark brows, jet-black hair long enough to curl around his ears and sharp angular cheekbones made him arresting — not to mention the cloud of testosterone that hovered in the air around him and had been a siren call to every other women in The Pillars of Hercules pub on Greek Street. But luckily, she’d never been susceptible to alpha-jerk types who spent a small fortune on their gym membership — if the over-developed biceps stretching the sleeves of his black T-shirt were anything to go by.

She drew her gaze away from his distracting biceps and concentrated on getting her point across — firmly and succinctly — again.

‘Libby wants us to join the floor together after her and Jamie finish their First Dance. So really, whether you want to dance or not is a moot point.’

He shrugged. ‘I’ll talk to Jamie, tell him to scratch that part.’

‘No you will not,’ she replied, somewhat less subtly. ‘This is Libby’s big day, and the First Dance is an important tradition at weddings in the UK— ‘

‘Hey, they have the same dumb deal in the US,’ he interrupted, the cynical edge to his voice making his thoughts on marriage abundantly clear. ‘So what? If my brother wants to make a jackass of himself, he can — he’s the one getting married. I’m just the Best Man, which makes me a jackass-free zone.’

‘That’s were you’re wrong,’ Sabrina replied, making her thoughts on his crappy attitude abundantly clear. ‘Because in this instance, the First Dance tradition also includes the Maid of Honour and the Best Man introducing the other couples to the dancefloor.’ He swore under his breath, but she soldiered on. ‘Libby and Jamie are practicing a whole routine for Ooh Baby Baby.’ She swallowed to stop her gag reflex from engaging, the way she had when Libby had informed her of the music choice with a breathless huff of pleasure the week before. Far be it from her — or Mr Testosterone — to rain on Libby’s schmaltz-fest. ‘All they require us to do is join them for the slow dance when the DJ fades into the next song.’

‘A slow dance?’ He spluttered, his eyes going a little squinty around the edges. ‘Right, no fucking way am I doing that.’

‘What is your problem?’ Sabrina felt her forehead tighten as the scowl won out. Forget subtle, the guy was obviously far too closely related to Cro-Magnon man to even process subtlety. ‘This isn’t actually about you. It’s about Libby and Jamie. All you have to do is sway in time to the music for one song. If you’re so worried about making a tit of yourself, I can lead.’ She added, knowing the suggestion was liable to trip his I’m-the-one-with-a-dick-here switch but unable to stop herself in the face of so much provocation.

‘I know how to slow dance, Sweetheart,’ came the predictably testosterone laced response. He rested a muscled forearm on the pub’s tiny table, perilously close to her own arm, invading her personal space and making her far too aware of the dimple in his chin and the flecks of silver in the piercing blue of his irises. ‘My point is I’m not slow-dancing with you.’

Sabrina set her margarita on the table, sucked in a calming breath to stop herself from hyperventilating — which unfortunately filled her lungs with the enticing scent of his sandlewood soap — and struggled to get a stranglehold on her patience.

‘Okay, I’m starting to sense a certain amount of hostility towards me personally.’ She forced her voice out of the shrill register. ‘And I’m not sure where it’s coming from?’ she continued. ‘As I’ve never met you before,’ she lied, hoping he didn’t notice the small quiver in her voice.

Unfortunately, she had met Connor McCoy once before, but she was fairly confident he’d forgotten about it.
She’d always been smart, focussed, ambitious and goal-orientated, and she wasn’t afraid to show it. Slightly more regular sex would be nice, but she didn’t need a man to complete her life — which she knew made her completely invisible to men like Connor McCoy, who thrived on female attention.

For once, she was grateful for her invisibility, when he sent her a blank look and didn’t call her on the lie.

Connor McCoy stared at the woman opposite him and knew exactly where his hostility was coming from. But he’d rather shoot himself in the nuts than admit it, especially to her.

Why the hell wouldn’t she let this drop? He’d agreed to wear a monkey suit. He’d agreed to stand at the front of the church like a prize douchebag and witness something he’d always thought was overrated. And he’d agreed to give a speech even though he didn’t know what the hell to say… But there was no way he was taking this uptight British chick in his arms, on or off a dancefloor.

He’d met Libby’s best friend, Sabrina Millard, before. For approximately ten minutes, five years ago. But the memory remained burned into his brain like battery acid.

It had been the end of the spring semester, and he’d been in the UK on business. He’d agreed to pick up Jamie and his stuff from the co-ed dorm in Manchester University that his brother had been sharing with his pretty English girlfriend Libby and Sabrina, because he hadn’t seen the kid in years. While Jamie and Libby had been saying a lengthy goodbye involving a lot of tongue on the sidewalk, Sabrina had insisted on directing him on how to pack Jamie’s stuff into the admittedly space-challenged muscle car he’d rented at Manchester airport. She’d issued instructions as if she were the Queen of England and he one of her lowly footmen, while wearing a shorty red dress over combat boots that should have made her look like a lesbian stormtrooper. But hadn’t.

He’d been avoiding meeting up with her again, ever since Jamie had told him she was the Maid of Honour. For the simple reason that the woman’s outspoken, pushy personality grated on his last nerve — and turned him on to the point of madness.

The male libido was a strange and beautiful thing, so he wasn’t much surprised about being aroused by a woman he couldn’t stand. He’d never wanted to have a conversation with Pamela Anderson, but it hadn’t stopped him jerking off over her poster as a kid. But as he didn’t much care for vanilla sex — and he’d bet his left nut Sabrina had never had a single sex-for-the-hell-of-it experience in her whole, well-ordered life — nailing Sabrina was definitely out.

Which would make slow-dancing with the woman at his brother’s wedding yet more aggravation he didn’t need. If he got that close to her, there was a real risk of him sporting wood. She’d notice and she’d say something – because women like Sabrina weren’t the type to let sleeping hard-ons lie — and if that happened, he wasn’t sure he’d be able to resist the urge to show her who was boss.